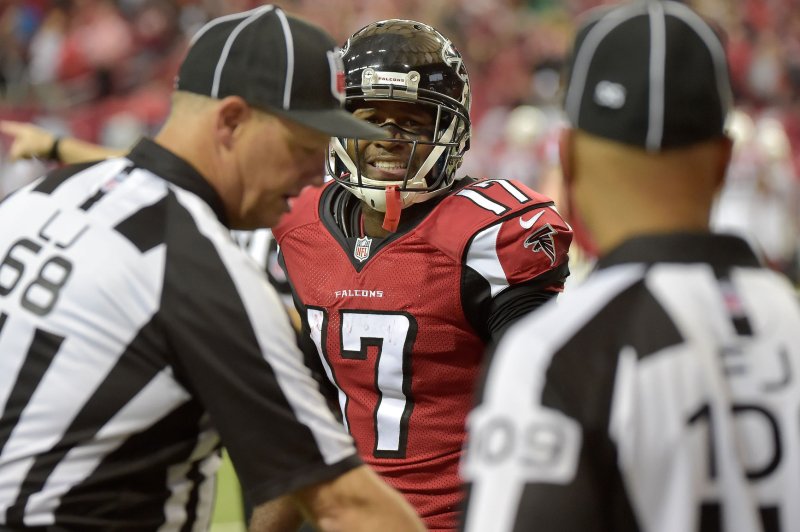 Former Atlanta Falcons wide receiver Devin Hester (17) reacts as officials nullify a potential Hester touchdown run because of an Atlanta penalty during the first half of their NFL game against the Arizona Cardinals at the Georgia Dome on November 30, 2014, in Atlanta. UPI/David Tulis | License Photo

Atlanta Falcons' Devin Hester (17) makes a punt return run past Arizona Cardinals' Sam Acho (94) during the first half of their NFL game at the Georgia Dome on November 30, 2014, in Atlanta. Officials nullified the potential Hester touchdown run because of an Atlanta penalty. UPI/David Tulis | License Photo

SEATTLE, Jan. 3 (UPI) -- The Seattle Seahawks are looking to add a punch to its special teams.

That could come in the form of kick returner Devin Hester, whom the organization signed Tuesday, according to multiple sources.

Hester, 34, was cut by the Baltimore Ravens in December. He was released by the Atlanta Falcons in July. Before signing on with the Seahawks, Hester worked out for the New England Patriots.

Hester owns the NFL record for all-time return touchdowns. He averaged 24.5 yards per kick return and 7..2 yards per punt return this season. The three-time First-Team All-Pro has 14 career punt returns for a score and five kickoffs for a score over his 11 year NFL career. The Seahawks were in need of an electrifying return man after a season-ending injury to Tyler Lockett.

The Seahawks host the Detroit Lions in the NFC Wild Card round at 8:15 p.m. Saturday, Jan. 7 at CenturyLink Field.