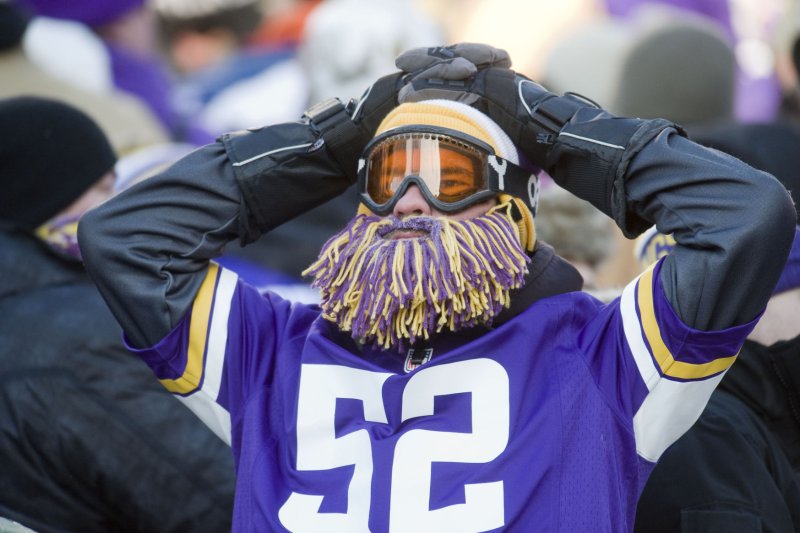 The Minnesota Vikings are 34-21 at home, but this is the first meeting at with the Chicago Bears at U.S. Bank Stadium. File Photo by Marilyn Indahl/UPI | License Photo

SERIES HISTORY: 111th regular-season meeting. Vikings lead series, 57-51-2. The Vikings are 34-21 at home, but this is the first meeting at U.S. Bank Stadium. The Vikings were 5-1 and coming off their first loss of the season when these teams met at Soldier Field on Halloween night. The Vikings were favored, but they came out flat and lost 20-10 to continue the slide that eventually turned a 5-0 team into the current 7-8 squad that was eliminated from the playoff race last week. The Vikings have won four straight at home against the Bears, including last year's 38-17 win at TCF Bank Stadium.

The Vikings must stop running back Jordan Howard. In the first meeting this year, the rookie ran for 153 yards and a touchdown on 26 carries (5.9). He also caught four passes for 49 yards, giving him 202 yards from scrimmage. Howard's 153-yard total and long run of 69 yards are season highs.

The Vikings need to win the turnover battle, which is something they didn't do while giving up 72 points in back-to-back losses to the Colts (34-6) and Packers (38-25). Bears QB Matt Barkley might help in this area. He threw eight of his 12 interceptions in the past two weeks.

The Vikings need to give some semblance of pass protection for QB Sam Bradford, whose completion percentage (71.3) is on pace to set an NFL record. Bradford needs better protection than he had when he was sacked five times in the loss at Chicago on Halloween. There is no running game for Minnesota as RB Adrian Peterson sits out what may be his final game for Vikings or in the NFL.

--Vikings SS Andrew Sendejo vs. Bears RB Jordan Howard. Sendejo isn't a Pro Bowler by any stretch. But the Vikings got a reminder of his worth in the first meeting when he was unable to play because of injury. Rookie seventh-round draft pick Jayron Kearse started and contributed to the Bears getting the early momentum and a lead they would never relinquish. Kearse took such a bad angle on Howard's early 69-yard run that he was benched for a while as the Vikings went with second-year pro Anthony Harris, the backup to free safety Harrison Smith. Howard ranks seventh in the league in rushing with 1,178 yards. He's also averaging 5.1 yards a carry. Sendejo is fifth on the team with 72 tackles. Obviously, it will take more than him to stop Howard. The line needs to control the gaps to allow the linebackers room to make tackles.

--Vikings OL Nick Easton, Joe Berger and Jeremiah Sirles vs. Bears DE Akiem Hicks. Hicks was a wrecking ball to the right side of the offensive line and offensive coordinator Norv Turner's game plan in the first meeting. That was a long time ago. Turner resigned the next day. And the Vikings have a different look on the right side. Sirles is the right tackle, having replaced T.J. Clemmings, who had to move to left tackle because of Jake Long's season-ending injury. Berger was the center but is now the right guard because of Brandon Fusco's concussion. And Easton is the new center. In the first meeting, Hicks had two sacks and four more hurries. His sacks came over Fusco at right guard and Berger at center.

Vikings WR Adam Thielen. One of the more improbable NFL feel-good stories could reach another milestone if this former Division II player has 40 receiving yards to top 1,000. A third-year player from Minnesota State Mankano, Thielen wasn't drafted and wasn't signed as a free agent immediately after the draft. He had to go through a tryout at the team's rookie minicamp first before getting a contract. This year, he is a starter and perhaps the team's best receiver. Or at least a close second behind Stefon Diggs. After career highs of 12 catches, 202 yards and two TDs in the loss to Green Bay, Thielen has 68 catches for 960 yards and five touchdowns.

-- Chicago rookie RB Jordan Howard has 1,178 yards rushing, third most by a rookie in franchise history.

-- Vikings QB Sam Bradford's completion percentage (71.3) is on pace to break the NFL record, while his interception percentage (0.8) would break Brett Favre's franchise mark of 1.3 in 2009. With 10 more completions, Bradford will surpass the team record of 379 set by Daunte Culpepper in 2004.

-- Vikings TE Kyle Rudolph has 72 receptions, second-most by a Vikings tight end in a season. He is tied for second among NFC tight ends with six TD catches.

If Bradford and Barkley continue throwing as they have been, the Vikings should catch enough passes to win easily.