Playoff-bound Miami Dolphins focused on one game at time 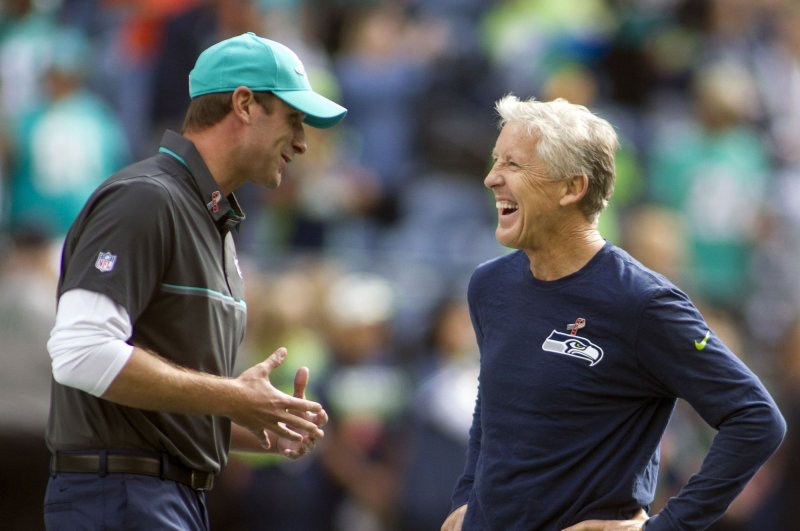 Miami Dolphins Matt Moore celebrates after throwing a 66 yard touchdown pass to Jarvis Landry in the 3rd quarter against the New York Jets in week 15 of the NFL at MetLife Stadium in East Rutherford, New Jersey on December 17, 2016. Photo by John Angelillo/UPI | License Photo

Miami Dolphins QB Matt Moore celebrates with the coaches on the bench after throwing a 66 yard touchdown pass to Jarvis Landry in the 3rd quarter against the New York Jets in week 15 of the NFL at MetLife Stadium in East Rutherford, New Jersey on December 17, 2016. Photo by John Angelillo/UPI | License Photo

The Miami Dolphins are in the playoffs for the first time since 2008 thanks to their rousing 34-31 overtime victory at Buffalo on Saturday and Denver's loss to Kansas City the following day.

Players were split on their approach to the game pitting the Broncos and Chiefs. Right tackle Ja'Wuan James went to sleep and didn't even watch the game. He found out the Dolphins were in the playoffs when he woke up Monday morning.

"I was excited for everybody on our team," James said, "especially the older guys like (defensive end) Cam (Wake), who have been here a long time."

On the other end of the spectrum, safety Michael Thomas watched the entire game and engaged in a defensive group text conversation afterward.

Of course, the Dolphins first face the New England Patriots in the season finale at Hard Rock Stadium on Sunday. And coach Adam Gase is sticking strongly to the "let's go 1-0 this week" mantra.

"I think our players are focused on this week because they know exactly who we're playing," Gase said. "This is absolutely a team, if you look past them, they will embarrass you. So our focus needs to be on playing New England, and if it's not, you'll see it on the field on Sunday."

Running back Jay Ajayi (32 carries, 206 rushing yards, one touchdown) led the way against the Bills, but he was far from the only playmaker.

RELATED Pittsburgh Steelers will head to playoffs on the upswing

That's the way it's been over the past few weeks. Miami has received big plays from offense, defense and special teams while overcoming its deficiencies.

Miami hopes that continues against New England and into the playoffs.

-- Miami has thrived with long touchdowns this year. The Dolphins have 12 touchdowns of 40 or more yards and they've come on offense, defense and special teams.

For example, Drake had a 96-yard kickoff return for a touchdown against the New York Jets in October and punt returner Jakeem Grant had a 74-yard score versus Tennessee. Linebacker Kiko Alonso had a 60-yard interception return touchdown against San Diego and wide receiver Kenny Stills had a 66-yard scoring reception versus the Jets in December.

The Dolphins aren't regarded as a big-play team, but they've become adept at making big-play touchdowns.

-- Miami (10-5) can claim somewhat of an edge on both of its potential playoff foes.

The Dolphins defeated Pittsburgh, 30-15, in October to start their six-game winning streak. Ajayi rushed for 204 yards and Miami knocked quarterback Ben Roethlisberger out of the game.

The Dolphins ended their seven-game losing streak against Houston last season with a 44-26 victory in their second contest under interim coach Dan Campbell.

The bad thing for the Dolphins, whose run defense ranks 30th in the NFL at 141.8 yards per game, is both Pittsburgh and Houston like to run the ball. The Steelers are led by Le'Veon Bell (1,268 yards rushing) and the Texans are led by ex-Dolphins running back Lamar Miller (1,073 yards rushing).