Buffalo Bills QB Tyrod Taylor is sacked for a six yard loss by Oakland Raiders Bruce Irwin (51) in the first quarter at the Oakland Coliseum in Oakland, California on December 4, 2016. The Raiders defeated the Bills 38-24. Photo by Terry Schmitt/UPI | License Photo

ORCHARD PARK, N.Y. -- With the clock potentially running out on Tyrod Taylor's career as Buffalo's starting quarterback, Taylor turned in the finest performance of his nearly two-year stint with the Bills in Saturday's 34-31 overtime loss to Miami.

Taylor threw for 329 yards and three touchdowns, rushed for 60 yards, and he rallied the Bills from 14 points down late in the third quarter into a 31-28 lead with 1:20 left in regulation.

Taylor has endured heavy criticism most of the season for his inability to make anything happen in the passing game. Entering the Miami matchup, the Bills ranked 31st in the NFL in passing, a position they've occupied most of the second half of the season. Taylor's difficulties with seeing the entire field, his penchant for leaving clean pockets and his nagging habit of waiting too long to deliver were all factors in the criticism.

Against Miami, there was a little bit of all that but not nearly as much as usual, and Taylor made several big throws in what is, to date, his signature game with Buffalo. He connected with Sammy Watkins with a perfect deep ball for a 38-yard touchdown, and he hit tight end Charles Clay over the middle on fourth-and-goal from the 7 for the touchdown that gave the Bills the lead late in the fourth quarter.

Not bad for a guy who got into a car accident on his way to the game in the morning, a mishap that he later said was not his fault and did not injure him in any way.

"Statistically, yes, it was a good day," Taylor said. "But like I said from Day 1, you're judged by wins as a quarterback."

Based on that metric, Taylor is now 15-14 as a starter for the Bills. Average at best, to be sure, and the more telling analysis is that Taylor does not have one truly quality victory on his resume. The only team he beat in 2015 that went to the playoffs was Houston. This year, the only playoff team Taylor beat is New England, but that came when Tom Brady was out and Jacoby Brissett was New England's quarterback.

Taking that victory over the Patriots out of the mix, the combined record of the other six teams Taylor beat this year is 21-67-2. Three of the wins came against the three worst teams in the NFL -- Cleveland, Jacksonville, and San Francisco -- and all those games were played at home.

Coupling his less than illustrious resume with his undeniable limitations as a passer, the prudent move for the Bills is to cut ties before 2017. One breakout game against an average Miami defense is not enough to warrant the Bills picking up the option on Taylor's contract which would guarantee him $27.5 million in salary and bonus compensation in 2017.

"I'm just going to continue to keep playing with the same passion, approach each game with the same attitude as far as getting better," Taylor said when he was asked about the possibility of Sunday's season finale against the New York Jets being his last game for the Bills. "Those talks, those conversations are really out of my hands. All I can do is go out there and play football, and that's what I'm going to continue to keep doing."

PASSING OFFENSE: A -- For the first time in his NFL career, Tyrod Taylor surpassed 300 yards passing, finishing at 329 on 26 of 39 with three touchdowns. Taylor twice rallied the Bills from 14 points down and put Buffalo ahead with 1:20 left in regulation on his second TD pass to Charles Clay. Sammy Watkins enjoyed his first 100-yard receiving game with 154 and caught a 38-yard TD, while Clay led the Bills with eight receptions totaling 85 yards.

RUSHING OFFENSE: A-plus -- The No. 1 rushing team in the league had another huge day as LeSean McCoy gained 128 yards, Mike Gillislee 91 and Tyrod Taylor 60. The Bills averaged 5.6 yards per carry behind an offensive line that was minus starting C Eric Wood and LT Cordy Glenn. Fourteen of the Bills' 30 first downs were achieved via the rush as Buffalo finished with 272 yards, the fourth time it has gone past 200 yards this season.

PASS DEFENSE: C-minus -- Poor tackling by the defensive backs led to an enormous amount of yards after catch for the Miami receivers, a big reason why Matt Moore finished with 233 yards passing. He really wasn't much of a factor and he threw a brutal end zone interception to CB Corey White at the end of the first half. The Bills did an excellent job on Jarvis Landry, who had only three catches for 29 yards. But a 56-yard DeVante Parker TD was the direct result of a missed open-field tackle by CB Nickell Robey-Coleman, and a 44-yard pass to Damien Williams that set up a TD came about thanks to CB Stephon Gilmore's missed tackle. One big problem was the pass rush, which was non-existent and did not sack or harass Moore.

RUSH DEFENSE: F -- Another abomination for the Bills, who allowed Jay Ajayi to rush for 206 yards, the second time he has topped 200 this year against the Bills. That made Ajayi just the third player in NFL history (O.J. Simpson, Jamal Lewis) to top 200 yards against the same team twice in one season. Miami gained 261 yards on the ground, giving it 517 rushing yards in two games against the Bills. The Bills were terrible in gap support, they missed numerous tackles, and they got burned by Ajayi's cutback runs. Beyond Ajayi, Kenyan Drake, who had 113 yards all season, broke a 45-yard TD run when Jerry Hughes broke down on the outside and didn't hold the edge when Drake reversed field.

SPECIAL TEAMS: D --Kicker Dan Carpenter missed two field goals, including one in overtime that could have been the game-winner. Carpenter has now missed six field goals and five extra points this season. The kickoff coverage team got burned for 39- and 41-yard returns, and the punt team allowed a 16-yard return. Brandon Tate had one decent play, a 23-yard punt return.

COACHING: D -- Rex Ryan punting with four minutes left in overtime might have been the worst decision of his coaching tenure in Buffalo. Having 10 men on the field when Ajayi broke a 57-yard run was a complete fail by the coaches. The defense did not learn anything regarding how to stop, or at least slow Ajayi, and he rumbled for 200 yards for the second time this year. On offense, it's hard to criticize anything, but the sequence that preceded Carpenter's missed field goal in OT killed the Bills as Anthony Lynn foolishly called for a reverse to Reggie Bush that lost eight yards and ruined the chances of scoring a game-ending touchdown. 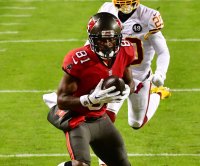 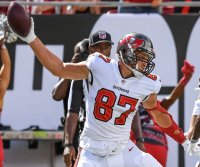