New England Patriots wide receiver Malcolm Mitchell (19) stays in-bounds while avoiding a tackle by Los Angeles Rams cornerback Michael Jordan (35) on an 11-yard reception in the third quarter at Gillette Stadium in Foxborough, Massachusetts on December 4, 2016. The Patriots defeated the Rams 26-10 and Brady became the NFL's all-time leader for wins by a quarterback for a total of 201 wins in 264 games. Photo by Matthew Healey/ UPI | License Photo

MIAMI, Dec. 6 (UPI) -- Congratulations! You've made it past all of the injuries, draft-day busts, and nail-biter games.

You are in the fantasy football playoffs. But now the fun truly begins, as every move you make or don't make could knock you out of championship contention.

Week 14 kicks off the playoffs in most fantasy football leagues. Bye weeks are over, meaning you have all players at your disposal. To help you get an edge, compensate for a recent injury, or play keep away from your opponent, take a look at my top players to add and top players to drop for Week 14.

Baltimore Ravens quarterback Joe Flacco is picking the perfect time to get hot. Flacco had a season-high 381 yards and four touchdowns last week against the Miami Dolphins. This week he gets a less-than-stellar New England Patriots unit in a game he will likely be forced to throw in. Flacco could be the move that puts you over-the-top with a stellar Monday Night Football showing. He is a QB1 this week in that matchup and is worth a streaming start if you are desperate at the position.

Andy Dalton might not have A.J. Green, but he is facing the Cleveland Browns in Week 14. That matchup has reaped rewards for opposing quarterbacks all seasons long. The Browns have allowed three passing touchdowns in three of its last four games. Dalton is coming off of his Week 13 performance of 332 yards and two touchdowns, making him a nice streaming play for the opening round of the playoffs.

Tampa Bay Buccaneers' Charles Sims is expected to be activated from injured reserve this week. With Doug Martin ailing, the running back could be in for a big day against the New Orleans Saints. This is definitely a situation to monitor. You need to add Sims if you have the space, even if it is only to keep him away from your opponents. He can bring a spark to your lineup throughout the playoffs if Martin misses extended time.

Detroit Lions running back Ameer Abdullah is more of a long-term depth play for your fantasy football cause. If you suffer an injury at the position, he could provide you with some safety if he ends up making his way back from inured reserve.

Malcolm Mitchell is a pretty exciting breakout candidate for the fantasy football playoffs. The rookie should shine for the New England Patriots as the team looks to compensate for the loss of Rob Gronkowksi. Mitchell has scored three times in his last three games. Although he didn't score in Week 13 against the Los Angeles Rams, he secured eight receptions for 82 yards. I like him as a WR3, even against a tough Baltimore Ravens defense in Week 14. He should see a hefty amount of targets from Tom Brady.

Tyler Lockett can't be completely trusted as a WR3, but he is a good swing-for-the-fences play in Week 14 against the Green Bay Packers. The Seattle Seahawks wide receiver broke out last week against the Carolina Panthers when he secured five receptions for 63 yards, but it was his 75-yard touchdown run that gained the most attention. That's what Lockett could be for you, if you are facing a big-time opponent. His floor is abysmal, but his ceiling is as high as it gets.

Ladarius Green is a top-10 tight end play in the fantasy football playoffs. The Pittsburgh Steelers playmaker is back in action, and just caught six passes for 110 yards and a score from Ben Roethlisberger in Week 13 against the New York Giants. I see him as a reliable option once again this week against the Buffalo Bills. 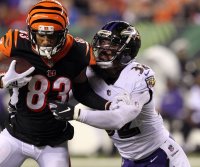