JACKSONVILLE, Fla. -- Needing a win to keep pace in an increasingly competitive AFC playoff race, the Denver Broncos turned to a talented defense as their offense sputtered for most of the afternoon Sunday at EverBank Field.

Led by a familiar face, the defense came through in the second half.

Outside linebacker Von Miller pressured Jacksonville Jaguars quarterback Blake Bortles into a pair of game-changing mistakes, and the Broncos held on for a 20-10 victory in what was mostly a defensive slog.

"They were exceptional," Denver coach Gary Kubiak said of his defense. "We knew coming in here that we needed to play great defense, win the turnover battle and win the field position battle against this team. They have a really good defensive football team; we respect them in what they do. You have to plan and come in here. I was concerned about our physical make-up with how tired we were, but we found a way. We showed a lot of character coming back after last week with the long trip to come out of here with (a victory)."

The win moved the Broncos (8-4) ahead of the Miami Dolphins, who were dealt a 38-6 beating by the Baltimore Ravens on Sunday, for the sixth spot in the AFC playoffs; the loss eliminated the Jaguars (2-10) from playoff contention for the ninth straight season.

Miller's first game-swinging play came on the third drive of the third quarter.

With the Broncos leading 10-3 after a sluggish start by both teams, Bortles targeted receiver Allen Robinson on a pass over the middle of the field on third-and-4. Quiet until that point, Miller hit Bortles he released the pass, causing it to float to cornerback Bradley Roby, who returned it 51 yards for a touchdown.

The interception was the 11th returned for a touchdown in Bortles' career, including the third in the past four weeks, and gave the Broncos a more comfortable 17-3 lead.

"It wasn't a great throw," said Bortles, who finished with a quarterback rating of 37.9. "I'll have to look at it again; (it was) probably behind him. It's kind of what we want, man coverage with A-Rob running across the field with a guy behind him, so you've just got to put it in front of him and let him run."

Miller later helped the Broncos provide one last stand in the final moments.

Trailing 17-10 after Bortles sprinted for a 22-yard touchdown early in the fourth quarter, the Jaguars faced second-and-10 from their 34-yard line with an opportunity to tie the game.

Instead, Miller showed once again why he is the highest-paid defensive player in NFL history, overpowering right tackle Jermey Parnell into Bortles as he tried to step up in the pocket.

The collision knocked the ball loose, and linebacker Shane Ray recovered for the Broncos.

Brandon McManus hit his second field goal of the game with 33 seconds remaining to ice the game.

"You would like to make a play every game like that," Miller said. "We were able to put it together and get the win this week."

Miller's late-game heroics overshadowed what was otherwise a sloppy game.

With starting quarterback Trevor Siemian out due to a sprained foot suffered during a difficult overtime loss to Kansas City last week, the Broncos struggled on offense.

Rookie quarterback Paxton Lynch started in place of Siemian and couldn't find any sort of rhythm. He finished 12 of 24 passing for just 104 yards with no touchdowns or interceptions.

Denver finished with just 206 yards -- the fewest allowed by the Jaguars under coach Gus Bradley.

The Broncos used an eight-play, 75-yard scoring drive in the second quarter for their only offensive touchdown, a possession that was helped when Jaguars linebacker Telvin Smith was flagged for hitting Lynch in the head on a third-down incompletion.

With a new set of downs, the Broncos gashed the Jaguars for runs of 24 and 13 yards by Kapri Bibbs. Devontae Booker then scored on a 6-yard run after breaking an attempted tackle by Smith and overpowering strong safety Johnathan Cyprien into the end zone to put Denver up 7-3.

Denver tacked on a field goal to go up 10-3 at halftime in large part due to more penalties called on the Jaguars.

Without running back Chris Ivory, receiver Allen Hurns and tight end Julius Thomas -- all out due to injury -- the Jaguars couldn't take advantage of a fantastic defensive performance.

Bortles ended the game 19 of 42 for 181 yards while rushing for 29 yards -- the latest poor performance in a season full of them. He has now gone almost a full year since going consecutive games without an interception -- the last stretch coming in Weeks 13 and 14 last season.

While the Jaguars finish the last month of the season with little to play for, the Broncos have a tough road ahead to make the playoffs: games against Tennessee, New England, Kansas City and Oakland.

That made getting a win over the Jaguars a must-have Sunday.

"It was one of those games: travel across the country, early game," Miller said, "and it was great to come away with the win."

NOTES: Jaguars TE Julius Thomas (back) did not play against his former team. Signed away from the Broncos prior to last season, Thomas was out for the second consecutive week and missed his third game of the season. He has 30 catches for 281 yards and four touchdowns this season. ... RB Denard Robinson started with RB Chris Ivory (hamstring) out and RB T.J. Yeldon (ankle) limited. ... Kalif Raymond had punt returns of 19 and 22 yards for the Broncos. ... WR Emmanuel Sanders reached 400 career receptions with his first catch of the game -- a 12-yarder in the first quarter. ... Denver is 7-0 this season when leading at halftime. 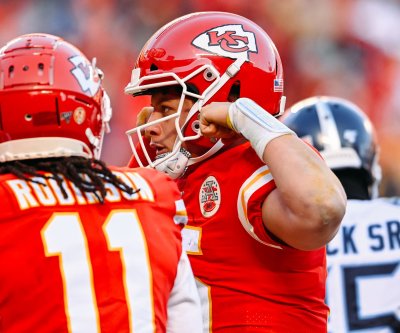