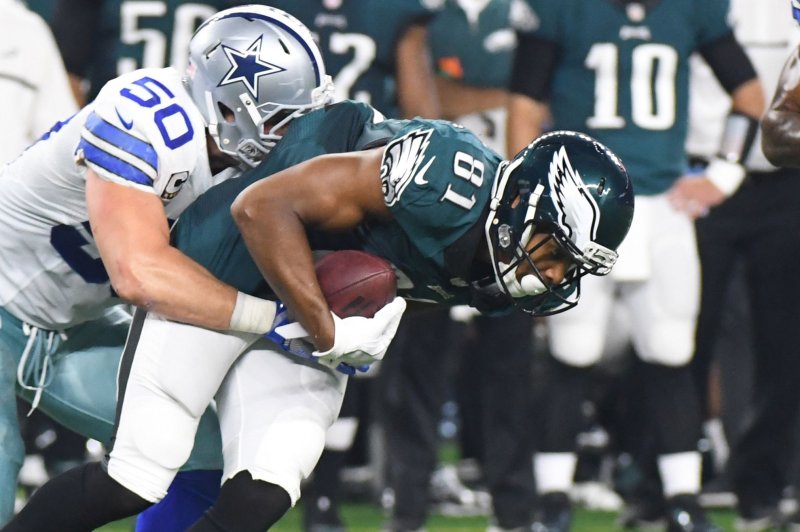 Dallas Cowboys Sean Lee wraps up the Philadelphia Eagles Jordan Matthews during the first half at AT&T Stadium in Arlington, Texas on October 30, 2016. Photo by Ian Halperin/UPI | License Photo

Philadelphia Eagles wide receiver Jordan Matthews (R) runs after a catch for a 7-yard gain and a first down to ice the game as Chicago Bears strong safety Harold Jones-Quartey chases him during the fourth quarter at Soldier Field in Chicago on September 19, 2016. The Eagles defeated the Bears 29-14. Photo by Brian Kersey/UPI | License Photo

Matthews was declared inactive for the 1 p.m. matchup, due to an ankle injury. The Eagles called Matthews a game-time decision earlier in the week, but his prognosis looked grim as Sunday drew closer. Mathews was limited in practice this week, after being diagnosed with a sprained right ankle.

He suffered the injury in the first half of the Eagles' Week 12 loss to the Green Bay Packers. The low-end WR2 had four receptions for 47 yards before his exit. If you own any Matthews stock in any of your fantasy football leagues, look for a backup plan heading into the playoffs. You will need depth at the position for weeks to come. Second-year pass-catcher Nelson Agholor is expected to play in place of Matthews. Matthews has 686 yards and three touchdowns on 57 receptions in 11 games for the Eagles.

#Eagles are far less confident in Jordan Matthews playing than they were earlier in the week. True 50/50 game time decision #Eagles