New York Jets quarterback Bryce Petty will make his first NFL start on Sunday against the Los Angeles Rams in place of Ryan Fitzpatrick, according to multiple reports. 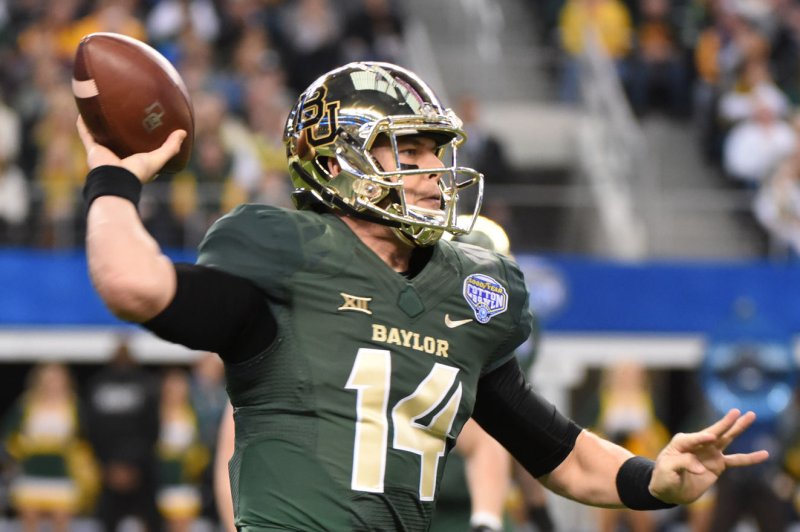 As a senior, Baylor Bear's Bryce Petty passed for 3,855 yards and 29 touchdowns along with six rushing touchdowns. Petty will get fir first NFL start against the Rams. Photo by Ian Halperin/UPI | License Photo

A resurgent Kenny Britt -- who in on pace for his first 1,000-yard season in his eighth NFL campaign -- will put Jets CB Darrelle Revis' skills to the test. Revis didn't get beat once last week against the Dolphins. Photo by Terry Schmitt/UPI | License Photo

SERIES HISTORY: 14th regular-season meeting, Rams lead series 9-4. The Jets earned their second straight win in the series in the most recent game between the teams Nov. 18, 2012, when Bilal Powell rushed for two touchdowns and Nick Folk booted a pair of 51-yard field goals in a 27-13 victory over the Rams in St. Louis. The Jets and Rams have played two overtime games, most recently on Jan. 2, 2005, when the Rams eked out a 32-29 win that left the Jets reliant on help from the Buffalo Bills -- who lost to the Pittsburgh Steelers -- to back into the playoffs as a wild-card team.

New York Jets quarterback Bryce Petty will make his first NFL start on Sunday against the Los Angeles Rams in place of Ryan Fitzpatrick, according to multiple reports.

Fitzpatrick, listed as questionable with a minor knee sprain, was injured last Sunday in a loss to the Miami Dolphins. He finished the game and practiced on a limited basis this week.

Fitzpatrick will be a game-time decision and if he is unable to go, rookie Christian Hackenberg will be active for the first time in his career.

The 25-year-old Petty saw his first-ever NFL playing time after Fitzpatrick was injured last week. Petty completed both of his pass attempts for 19 yards in four snaps before Fitzpatrick re-entered the game.

Petty, a fourth-round pick out of Baylor in 2015, moved up to No. 2 when Geno Smith, starting for the benched Fitzpatrick, suffered a season-ending knee injury on Oct. 23.

With their quarterback situation unsettled the Jets are going to have to rely more than ever on RBs Matt Forte and Bilal Powell. In a 27-23 loss to the Dolphins last Sunday, Forte inexplicably got just 12 carries, a total he likely will have to double in order for the Jets to beat the Rams. Petty's first completion was to Powell, who should be a big part of the game as a pass catcher. Forte and Powell will be doubly valuable Sunday, considering WR Brandon Marshall may not get much going against Rams shutdown CB Trumaine Johnson.

On defense, the Jets need to roll the dice and make mistake-prone QB Case Keenum try to beat them through the air. The Rams actually put more on Keenum's shoulders the last three weeks, during which All-Pro RB Todd Gurley failed to reach 20 carries in a game or score a touchdown. Even after allowing Dolphins RB Jay Ajayi to rush for 111 yards last Sunday, the Jets are limiting opposing ballcarriers to 3.5 yards per attempt. If the Jets can shut down Gurley and give CB Darrelle Revis some safety help on WR Kenny Britt, they would be positioned to win a low-scoring game.

--Rams WR Kenny Britt vs. Jets CB Darrelle Revis. Revis didn't get beat once last week against the Miami Dolphins. Of course, the Dolphins also didn't throw at him a single time. Still, Revis will take confidence-boosters where he can find them. A resurgent Britt -- on pace for his first 1,000-yard season in his eighth NFL campaign -- should provide a better barometer for Revis. The Rams have been unusually aggressive through the air with mediocre QB Case Keenum and are unlikely to get much going on the ground against the Jets' stout run defense.

--Jets WR Brandon Marshall vs. Rams CB Trumaine Johnson. Marshall has 40 catches for 585 yards and two touchdowns. Johnson has totaled 28 tackles and one interception through six games while sitting out three with an ankle injury.

LT Ben Ijalana. Welcome to the big time, kid. As the backup the previous three seasons to ironman D'Brickashaw Ferguson, Ijalana annually looked pretty good in training camp before returning to mothballs once the season kicked off. Ijalana held his own as part of a timeshare, along with Brent Qvale, at right tackle earlier this season, but he is entrenched at left tackle now following the loss of Ryan Clady. At 27, Ijalana is getting his first and likely last chance to prove he can be a building block.

Jets DT Leonard Williams leads the team and is second among AFC D-linemen with six sacks. He has 5.5 sacks in his past five at home.

These two teams continue to have issues at quarterback, which means this game doesn't figure to feature many points.