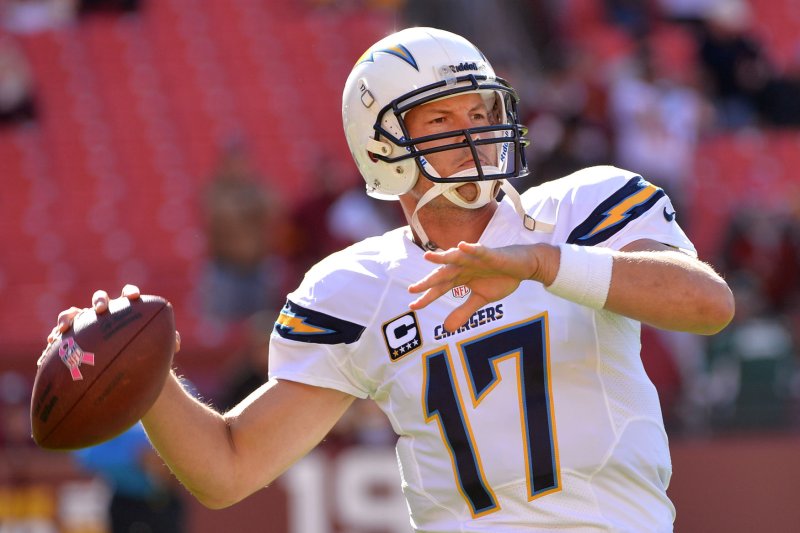 That's the mantra for the San Diego Chargers as fourth-year head coach Mike McCoy prepares for only 16 returning starters at his July 29 training camp from a team that was 4-12 in 2015, last in the AFC West.

Ever-confident Philip Rivers, the best of a talented batch of quarterbacks in this competitive division, is 34 years old, which means he remembers when the Chargers flipped from 4-12 to 12-4 in 2004.

He was a rookie behind a guy named Drew Brees at the time, but doesn't sweat the details.

"We've done it before," Rivers submits. "I really think we can do it."

To manage such magic, the Chargers would need to avoid the injury bug that bit them so hard last year that they needed 24 different linemen just to line up each week, and never with the same five starters.

They also must manage without safety Eric Weddle, the physical and vocal leader of the defense for more than a decade. He signed with the Baltimore Ravens ($26 million, three years) and cornerback Patrick Robinson jumped to the Indianapolis Colts ($14 million, three years).

A closer look at the group that's led by the GOAT: https://t.co/bsIkP9zG8o pic.twitter.com/Z8ID6U8bCS

Looking to the future, the Chargers grabbed the best tight end in the draft, Arkansas' Hunter Henry (Round 2, No. 35).

The defensive line received help with the free-agent signing of Brandon Mebane (Seattle Seahawks, $13.5 million, three years) and although the Chargers drafted Ohio State defensive end Joey Bosa with the No. 3 overall pick, as of this writing (July 21) he is unsigned.

Also, running back Melvin Gordon, who had a disappointing rookie season, looked good in the spring after microfracture knee surgery in the offseason.

Will all that push the Chargers from worst to first in a division that may be the most competitive in the league? Obviously a longshot, but it should be entertaining watching Rivers give it a try.

Here is a closer look at the newcomers and key players and how they should factor into the Chargers' 2016 team:

Gordon struggled his rookie season and now to be coming back from a knee injury that was more significant than many believe didn't bode well for last year's top pick.

But Gordon had an outstanding minicamp and looked good in the OTA sessions leading up to it. He's making the cuts. He's running with a purpose. He's eager to show last year was an aberration and not a trend of what to expect in his NFL career.

If Gordon can show the skills he displayed in minicamp, the Chargers' longtime running woes could finally be solved.

A closer look at the Chargers' picks (8):

The Chargers claim they never came off of Bosa as being the pick, despite the flurry of trades with the picks above them. Bosa is going to be asked to rev a pass rush that has been underwhelming. He will also help fortify one of the poorest run defenses in the NFL.

The top tight end in the draft heads to the Chargers, addressing a clear need. While Antonio Gates remains on the roster, it's clear his time is almost done. Just maybe Gates passes the torch to Henry, an All-America pick and the winner of the John Mackey Award that goes to the nation's top collegiate tight end. Henry set career highs last season with 51 receptions and 739 yards. Quarterback Philip Rivers could have another favorite target on the underneath routes with Henry.

Since Pro Bowler Nick Hardwick stopped playing early in the 2014 season, the Chargers have been seeking his replacement. They might have secured that player in Tuerk, although his path to being a starter was clogged when the team signed veteran Bears free agent Matt Slauson. The Chargers were decimated by injuries along the line last year, working 24 different combinations. Tuerk will be given every chance to prove that he can contribute, but it will most likely be in a backup role. He has experience in other spots along the line, something the Chargers embrace. Tuerk hurt his knee in October after being an All-Pac 12 selection in 2014 and is still rounding into shape.

It's cliche, but the Bolts' brass said it was surprised the run-stuffing Perry was available after 101 picks. With Manti Te'o and Denzel Perryman returning, Perry will have to earn his stripes on special teams.

Brown might add some zest to the pass rush, but it's a long depth chart to climb. Still, he could steal some snaps from Kyle Emanuel and/or Jerry Attaochu. Brown seems a tad undersized, but he impressed the Chargers with his quickness and deceptive strength.

Kaser was rated by most as the draft's top punter. Kaser just might join former teammate Josh Lambo to make up the other leg in the team's kicking game. With returning punter Mike Scifres scheduled to make $3.6 million next season, Kaser could be a more economical option.

Watt could lead the running plays for a former Wisconsin star and teammate in Melvin Gordon. Watt is the brother of the Texans' J.J. Watt, but he'll be asked to clear holes and not clean clocks. Watt's selection reveals how the Chargers misfired last year in drafting Gordon without a fullback.

Clark has his work cut out to make the team; then again he comes to a unit that has been beset by injuries along the offensive line the past two years. Interior starters D.J. Fluker and Orlando Franklin are blocking Clark's path -- for now. But team likes his size and ability to run-block.

--WR Travis Benjamin: This speedy target will supply a deep threat and valuable yards on punts.

--CB Richard Crawford: He has a history with the team, most of it being on the practice squad.

--TE Jeff Cumberland: He had over 1,000 passing yards and 10 touchdowns with Jets in four seasons.

--S Dwight Lowery: With the lack of depth at safety, Lowery could be in a position to start.

--QB Zach Mettenberger: Picked up on waivers thanks to connection with coordinator Ken Whisenhunt, who was in Tennessee last season.

--C/G Matt Slauson: Mostly a guard, but expected to stabilize center for the Chargers.

--It's hard to discount what Weddle meant to the Chargers. Not just through his stellar play, but he was responsible for lining up his teammates and was an emotional sparkplug as well.

NFL // 2 days ago
Burrow leads Bengals over Dolphins; QB Tagovailoa suffers concussion
Sept. 30 (UPI) -- Joe Burrow threw two passing scores to lead the Cincinnati Bengals to their second win of the season, while the Miami Dolphins lost quarterback Tua Tagovailoa to a concussion in the first game of the NFL's Week 4 slate.

NFL // 3 days ago
Browns DE Myles Garrett cited for failing to control Porsche before crash
Sept. 29 (UPI) -- All-Pro defensive end Myles Garrett was cited to "failure to control" his Porsche and received a court summons for next month after he flipped the car in a single-car crash, the Ohio State Highway Patrol said Thursday.

NFL // 3 days ago
NFL looks into filming of Dolphins' practice in Cincinnati
Sept. 29 (UPI) -- NFL security is looking into an issue that surfaced in Cincinnati, when someone filmed a closed Miami Dolphins practice and posted footage from it on social media, a league source told UPI on Thursday.