New England Patriots quarterback Tom Brady (12) smiles as he walks off the field after the Patriots defeated the Kansas City Chiefs 27-20 in the AFC Divisional Playoff at Gillette Stadium in Foxborough, Massachusetts on January 16, 2016. Photo by Matthew Healey/UPI | License Photo

New England Patriots quarterback Tom Brady has taken a knee and opted to drop his legal fight versus the NFL involving his four-game suspension for his role in Deflategate.

Brady announced the news on Friday via his Facebook page.

"I'm very grateful for the overwhelming support I've received from (Patriots owner Robert) Kraft, the Kraft family, coach (Bill) Belichick, my coaches and teammates, the NFLPA, my agents, my loving family and most of all, our fans," Brady wrote.

"It has been a challenging 18 months and I have made the difficult decision to no longer proceed with the legal process. I'm going to work hard to be the best player I can be for the New England Patriots and I look forward to having the opportunity to return to the field this fall."

Brady, who will miss the first four games of the upcoming season, made his decision on the heels of the 2nd U.S. Circuit Court of Appeals denying his appeal to rehear his case. The veteran quarterback and the NFL Players Association were asking for the full appeals court panel of judges to hear the case but it was rejected in a one-sentence decision issued Wednesday.

"After careful consideration and discussion with Tom Brady, the NFLPA will not be seeking a stay of the four-game suspension with the 2nd Circuit," the NFLPA said in a statement Friday. "This decision was made in the interest of certainty and planning for Tom prior to the New England Patriots season. We will continue to review all of our options and we reserve our rights to petition for cert to the Supreme Court."

A source told ESPN's Adam Schefter that the union is expected to petition for cert in an effort to challenge NFL commissioner Roger Goodell's power.

On April 25, the three-judge appeals court panel ruled 2-1 that Goodell was within his powers when he suspended Brady for his alleged role to deflate the footballs used in the 2015 AFC Championship Game against the Indianapolis Colts on Jan. 18, 2015.

Brady was originally suspended by Goodell on May 11, 2015, for his involvement in the game, which New England won 45-7.

The NFL-commissioned investigation was conducted by attorney Ted Wells, who concluded it was "more probable than not" that Brady was "generally aware" of Patriots attendants deflating footballs prior to the AFC Championship Game.

The Patriots were docked $1 million and two draft picks for the scandal that has come to be known as Deflategate.

Kraft did not appeal the $1 million fine and the loss of a first-round pick in the 2016 draft and a fourth-rounder in 2017 as part of the penalties.

With the suspension, Brady will miss the season opener on the road against the Arizona Cardinals on "Sunday Night Football" on Sept. 11. He also will miss games against the Miami Dolphins, Houston Texans and Buffalo Bills. Backup quarterback Jimmy Garoppolo is expected to take over in those games.

Brady will be eligible to return in Week 5 on Oct. 9 against the Cleveland Browns. The four-time Super Bowl winner signed a two-year contract extension during the offseason that dropped his 2016 salary from $9 million to $1 million to save himself almost $2 million in lost salary during the suspension. His renegotiated deal deferred $8 million of his 2016 salary.

NFL // 11 hours ago
Bengals-Titans, 49ers-Packers start weekend's NFL divisional round
MIAMI, Jan. 20 (UPI) -- The Tennessee Titans host the Cincinnati Bengals on Saturday in the first divisional round of the 2022 NFL playoffs. Six more teams will take the field to determine who plays in the respective AFC and NFC title games. 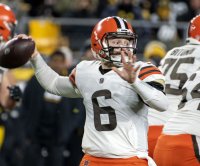 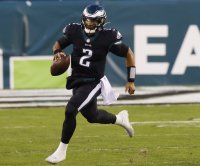 NFL // 1 day ago
Eagles plan to bring back QB Jalen Hurts as 2022 starter
Jan. 19 (UPI) -- The Philadelphia Eagles intend to bring back Jalen Hurts as their starting quarterback in 2022, despite his struggles as a passer in 2021, general manager Howie Roseman and coach Nick Sirianni told reporters Wednesday.

NFL // 1 day ago
Cowboys QB Dak Prescott says 'sorry' for NFL referee criticism
Jan. 19 (UPI) -- Dak Prescott "deeply regrets" critical comments he made about officials and is "sorry" for condoning fans throwing objects onto the field after the Dallas Cowboys' playoff loss to the San Francisco 49ers, he tweeted.

NFL // 2 days ago
Matthew Stafford, Rams crush Cardinals, advance to divisional round
Jan. 18 (UPI) -- Veteran quarterback Matthew Stafford earned his first career playoff win, throwing for two scores and running for another in a dominant Los Angeles Rams victory over the Arizona Cardinals in the 2022 NFL wild-card round.