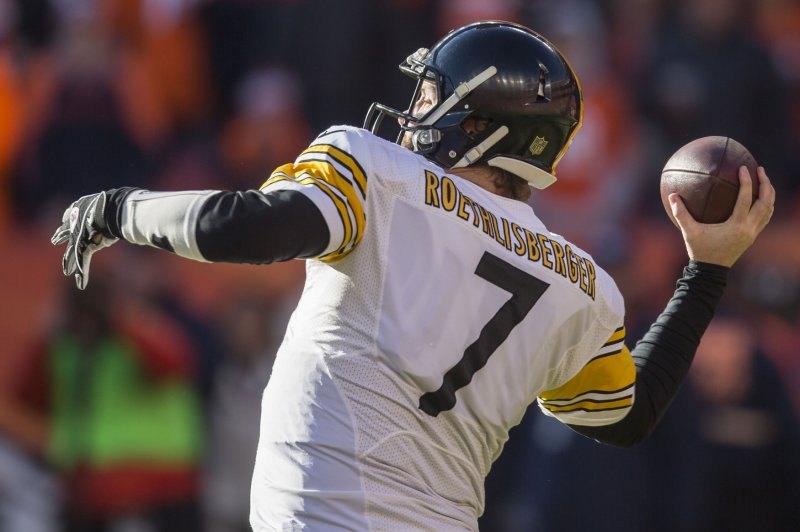 Pittsburgh Steelers quarterback Ben Roethlisberger throws a long incomplete pass on the first play from scrimmage against the Denver Broncos in the first quarter during the AFC Divisional game at Sport Authority Field at Mile High in Denver on January 17, 2016. Photo by Gary C. Caskey/UPI | License Photo

Pittsburgh Steelers quarterback Ben Roethlisberger celebrates after leading his team to a first quarter touchdown against the Denver Broncos during the AFC Divisional game at Sport Authority Field at Mile High in Denver on January 17, 2016. Photo by Gary C. Caskey/UPI | License Photo

PITTSBURGH, Jan. 18 (UPI) -- Two players in as many weeks have been accused of faking injuries on the Pittsburgh Steelers.

"Ben was healthy as hell," Talib told reporters. "He didn't fool anybody."

Aqib Talib: Ben was healthy as hell. He didn’t fool anybody

Last week, Cincinnati cornerback Adam Jones accused wide receiver Antonio Brown of faking a concussion in the Bengals' wildcard loss to the Steelers. He would later apologize after Brown was ruled out of the Steelers' game against Denver.

Last week, former Baltimore Ravens coach Brian Billick called Roethlisberger a "Drama Queen" when it came to dealing with injuries. Roethlisberger said on CBS's 93.7 The Fan that he suffered a sprained AC joint and torn ligaments after being sacked by Bengals linebacker Vontaze Burfict.

"It didn't hurt when I reached back to throw," Roethlisberger told 93.7 The Fan, referring to his game-winning drive in Cincinnati. "But it was pushing forward to throw and then the end of the throw. So I definitely felt like I was shortening up my motion up a little bit, which is why we threw some screens, and couldn't really get the ball down the field... I think it just more affected how I could throw it."

"Ben, he kind of looks like Obi-Wan Kenobi," Smith told Jones. "He tried to pull the Jedi mind trick on everybody," Denver defensive end Antonio Smith told USA TODAY Sports. "'Oh yeah, I'm really hurt. I might not play.' And then he comes in the game and tries to ball."

Roethlisberger completed 24-of-37 passes for 339 yards Sunday, without his star wide receiver Brown. In 2015, Roethlisberger started a career-low 11 games.