By
Derek Harper, The Sports Xchange 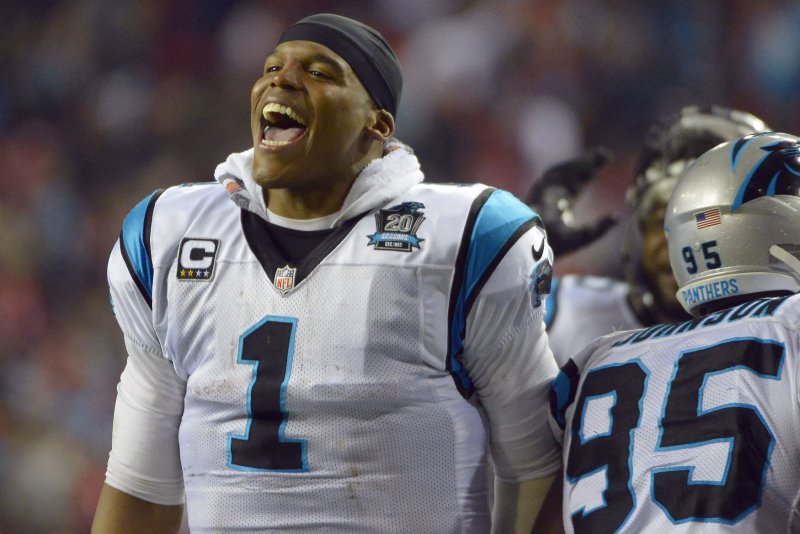 The Carolina Panthers and quarterback Cam Newton try to remain unbeaten when they host the Philadelphia Eagles on Sunday at Bank of America Stadium in Charlotte. File photo David Tulis/UPI | License Photo

*Keys to the game: The Eagles blew out the Giants to take over first place of the woeful NFC East on Monday night, but there remain strong underlying concerns with the Philadelphia offense. It begins with QB Sam Bradford, who was acquired for his accuracy and ability to protect the football. But he now has nine interceptions following a three-pick effort Monday, and several more passes could have been intercepted as he regularly underthrows his receivers. RB DeMarco Murray is coming off his first 100-yard game of the season, but much of that came after the game was out of reach. The Panthers will look to contain him with a solid run defense allowing 3.9 yards per carry.

DT Fletcher Cox said the Eagles have the potential to be the league's best defense, and Philadelphia has gone 18 consecutive games without allowing a 100-yard rusher while generating 33 points off seven turnovers the past two games. But coach Chip Kelly's up-tempo offense is leaving the defense on the field for a whopping average of 34:02 per game. Carolina's offense is third in the league in rushing, aided by QB Cam Newton being second on the team with 225 rushing yards while contributing a team-high three rushing touchdowns. He has few options downfield when TE Greg Olsen is covered, but Carolina is doing a good job of picking off a few yards on early downs and avoiding putting Newton in position to force the ball downfield.

*Matchup to watch - Eagles LOLB Connor Barwin vs. Panthers RT Mike Remmers: A former undrafted rookie out of Oregon State who was signed off St. Louis' practice squad a year ago this week, Remmers is a first-year starter who has already held his own against the likes of J.J. Watt. Barwin is the emotional leader of the Eagles' front seven, but has only managed a pair of sacks through six games.

*Player spotlight - Panthers WR Corey Brown: Offensive coordinator Mike Shula is a bit hamstrung in his play-calling due to the lack of downfield playmakers, but continues to find ways to get the ball into the hands of the 5-foot-11 Brown. He lined up in the backfield with Newton at times in Seattle and was constantly in motion as Shula worked to keep the defense off-balance.

*Fast facts: Four of Bradford's nine interceptions have come inside the red zone. ... Panthers CB Josh Norman leads the NFL with a 24.1 passer rating against, according to Pro Football Focus.

WHO WILL WIN AND WHY

The Panthers are far from an intimidating 5-0, but they are playing to their strengths with a plodding offense that can control the ball and let the defense carry the load. The Eagles remain sloppy, and QB Sam Bradford's inconsistency is fatal against playoff-caliber teams.