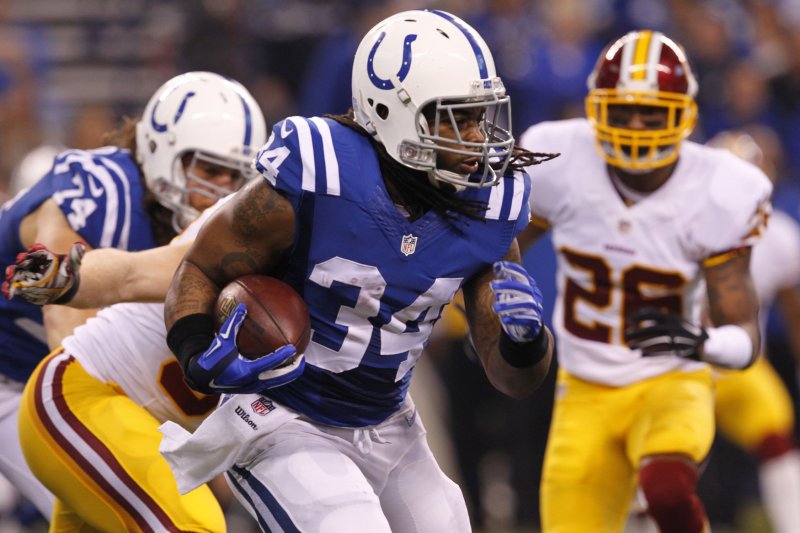 Indianapolis Colts Trent Richardson gets wrapped up by Dallas Cowboys Jeremy Mincy during the first half at AT&T Stadium on December 21, 2014 in Arlington, Texas. UPI/Ian Halperin | License Photo

Indianapolis Colts running back Trent Richardson (34) is tripped up by Cincinnati Bengals' Leon Hall (29) during the first half of play at Lucas Oil Stadium in Indianapolis, Indiana, October 19, 2014. UPI/John Sommers II | License Photo

OAKLAND, Calif., Aug. 3 (UPI) -- It has been a long time since Trent Richardson sat comfortably atop an NFL depth chart. Now the competition for carries comes in Oakland, where Richardson has a 50 percent shot to make the Raiders' roster, according to Ian Rapoport.

Richardson, 25, was selected No. 3 overall in the 2012 NFL Draft by the Cleveland Browns. Since that year, Richardson has also suited up for the Indianapolis Colts.

Richardson is currently on the non-football-illness list and not practicing, because he reported to training camp overweight.

"Trent is here," Raiders coach Jack Del Rio told RaiderBeat.com. "He came back very close to the weight, which was a pretty ambitious goal to get to. He's down in the low 220s. That's what we asked of him. That's where he was. ... He'll have a chance to come out here and show what he's really capable of."

Richardson will be competing with Latavius Murray, Roy Helu Jr., Taiwan Jones and Michael Dyer to make the 53-man roster.