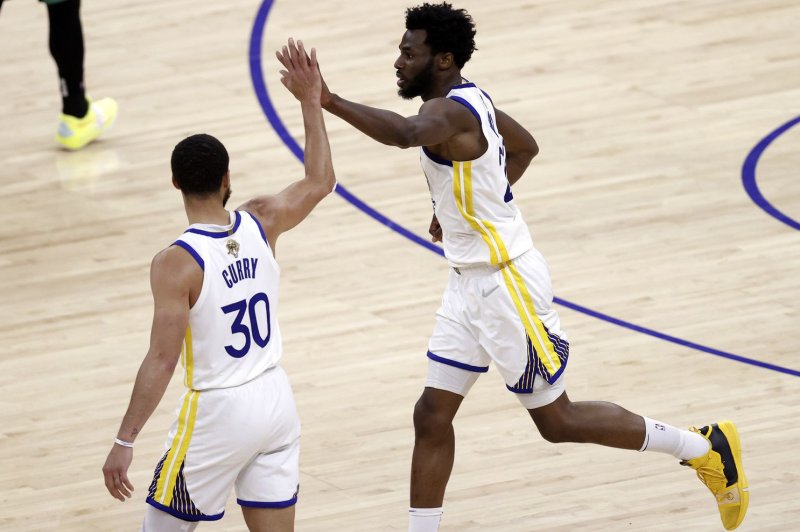 Golden State Warriors forward Andrew Wiggins (R) scored 10 of his team-high 26 points in the fourth quarter of an NBA Finals win over the Boston Celtics on Monday in San Francisco. Photo by John G. Mabanglo/EPA-EFE

June 14 (UPI) -- Andrew Wiggins totaled 26 points and 13 rebounds on Monday night and the Golden State Warriors overcame a rare poor shooting night from 3-point range to beat the Boston Celtics in Game 5 and move within one game of its seventh NBA championship.

"It's something I dreamt about for sure, being in the league, and this is the ultimate stage," Wiggins told reporters after the 104-94 win Monday at Chase Center in San Francisco. "It doesn't get bigger than this.

"I was out there being aggressive. It was a good game."

The Warriors made just 9 of 40 3-point attempts. Star guard Stephen Curry was 0 for 9 from downtown and scored 16 points, but the Warriors still managed to move just one win away from securing a title in the best-of-seven game series.

"Obviously, my track record says I shoot the ball better the next game," Curry said. "Looking forward to that bounce-back."

Celtics forward Jayson Tatum logged a game-high 27 points and 10 rebounds in the loss. The game featured four lead changes and was tied twice. The Warriors outscored the Celtics 50-36 in the paint, 12-8 off fast breaks, 31-10 off the bench, 22-9 off turnovers and led by as many as a dozen points.

Tatum and guards Jaylen Brown and Marcus Smart scored nine points apiece for the Celtics in the third. The Celtics started the quarter on a 10-0 run and outscored the Warriors 35-24, but still trailed 75-74 to start the fourth.

The Warriors scored 10 unanswered to start the final quarter and never trailed again. Wiggins scored 10 points over the final 12 minutes.

"Over the course of the game, we made some good plays. We were in it," Brown said. "I felt like we just couldn't get over the hump.

"Tough loss, but got the opportunity to even it back up on our home floor, push a Game 7. I'm looking forward to that challenge."

Game 6 will tip off at 9 p.m. EDT Thursday at TD Garden in Boston. Game 7, if necessary, will be at 8 p.m. Sunday at Chase Center.

"Here we are, we have a chance," Warriors coach Steve Kerr said. "We have two cracks at getting one win, but we also know how difficult it's going to be.

"Nobody's celebrating, but we are excited to be in this spot, and we want to take advantage of it."

NBA // 3 days ago
NBA Draft: Smith, Holmgren, Banchero expected to be first picks
June 23 (UPI) -- Auburn's Jabari Smith Jr., Gonzaga's Chet Holmgren and Duke's Paolo Banchero are expected to be the first three picks of the 2022 NBA Draft, which tips off at 7:30 p.m. EDT Thursday at Barclays Center in Brooklyn.

NBA // 3 days ago
Blazers trade for Pistons forward Jerami Grant
June 23 (UPI) -- The Detroit Pistons traded forward Jerami Grant and a draft pick to the Portland Trail Blazers in exchange for picks in the 2022 NBA Draft and 2025 NBA Draft, a league source told UPI on Thursday.

NBA // 1 week ago
Warriors beat Celtics in Game 6, win 4th NBA title in Stephen Curry era
June 16 (UPI) -- Behind another vintage Stephen Curry performance, the Golden State Warriors closed out the Boston Celtics 103-90 in Game 6 of the NBA Finals on Thursday night for their fourth championship in the past eight seasons.