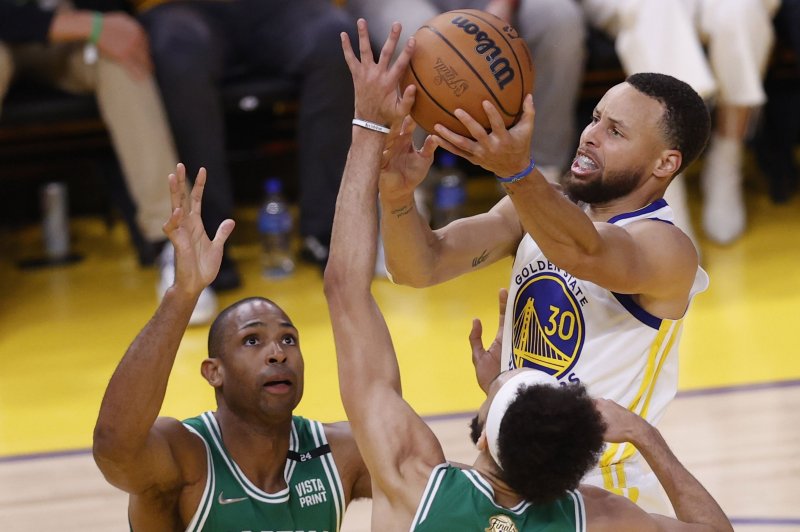 Golden State Warriors guard Stephen Curry (30) scored 14 of his game-high 29 points in the third quarter of a win over the Boston Celtics in Game 2 of the NBA Finals on Sunday in San Francisco. Photo by John G. Mabanglo/EPA-EFE

June 6 (UPI) -- Stephen Curry scored a game-high 29 points to lead the Golden State Warriors to a 19-point blowout of the Boston Celtics in Game 2 of the NBA Finals. The lopsided win tied the series 1-1.

Curry scored 14 in the third quarter of the 107-88 triumph Sunday at Chase Center in San Francisco. Fellow Warriors guard Jordan Poole scored 17 points off the bench. Poole and Curry each sank five 3-pointers.

"The preparation was mostly about our intensity and physicality," Warriors coach Steve Kerr told reporters. "It was obviously ramped up, and it needed to be, given what Boston did in Game 1."

The Warriors outscored the Celtics 40-24 in the paint and 33-15 off turnovers and led by as many as 29 points. The game featured eight lead changes and was tied seven times. Game 3 will be Wednesday in Boston.

"We were a little stagnant in the third quarter, and I feel like it translated on the defensive end," Celtics forward Jayson Tatum said.

Tatum and guard Jaylen Brown poured in 13 points apiece over the first 12 minutes. The Celtics went on a 13-2 run early in the first quarter. The Warriors answered with a 10-2 run late in the quarter and took a 31-30 lead into the second.

The score stayed tight over the next 12 minutes, but the Warriors carried a 52-50 lead into the break. Brown tied the score 53 seconds into the third.

The Warriors responded with a 13-2 run and never looked back. They outscored the Celtics 35-14 in the quarter and carried an 87-64 lead into the fourth. The Celtics rested their starters for the majority of the final quarter.

Tatum totaled a team-high 28 points, with six 3-pointers in the loss. Brown totaled 17 for the Celtics. Derrick White scored a dozen off the Celtics bench.

The Celtics will host the Warriors in Game 3 at 9 p.m. EDT Wednesday at TD Garden in Boston. The game will air on ABC.

NBA // 23 hours ago
Nuggets, Jokic agree to NBA-record $264M contract
July 1 (UPI) -- The Denver Nuggets and All-NBA center Nikola Jokic agreed to a five-year extension worth at least $264 million, the most lucrative pact in league history.

NBA // 2 days ago
Wizards to trade Caldwell-Pope, Smith to Nuggets for Barton, Morris
June 29 (UPI) -- The Washington Wizards agreed to trade Kentavious Caldwell-Pope and Ish Smith to the Denver Nuggets in exchange for Will Barton and Monte Morris, a league source told UPI on Wednesday.