MLB regular-season games, NASCAR races and UFC fights will be among the other events broadcast Friday through Sunday.

Stephen Curry and the Golden State Warriors and Jayson Tatum and the Boston Celtics opened the NBA Finals with Game 1 on Thursday in San Francisco. The best-of-seven game series could continue through June 19, if necessary.

"We respect them, and they present unique challenges to us," Warriors guard Klay Thompson told reporters Wednesday, when asked about the Celtics. "But it's just going to be a dogfight.

"We know how physical and athletic they are, and we expect a hard-fought series."

Game 2 of the NBA Finals will tip off at 8 p.m. EDT Sunday at Chase Center in San Francisco. The series will then head to Boston for Game 3 and Game 4. Game 3. Those games will tip off at 9 p.m. Wednesday and June 10, respectively.

The Warriors, who are 9-1 this postseason at Chase Center, are favorites to win the series. They are in the NBA Finals for the sixth time in the past eight seasons.

The Celtics, who won Game 1 in San Francisco, can pass the Los Angeles Lakers for the most titles in NBA history if they win the series. The storied franchises each own 17 championships.

The French Open, the second Grand Slam tournament of the tennis season, will wrap up this weekend in Paris.

No. 5 Rafael Nadal of Spain will face No. 3 Alexander Zverev of Germany in the first of two men's singles semifinals Friday at Roland Garros.

No. 8 Casper Ruud of Norway will battle No. 20 Marin Cilic of Croatia in the second semifinal at Court Philippe-Catrier.

The men's singles final will air at 9 a.m. EDT Sunday on NBC.

American Cori "Coco" Gauff, the No. 18 seed, will face No. 1 Iga Swiatek of Poland in the women's singles semifinal. That match will air at 9 a.m. EDT Saturday on NBC.

The reigning champion Tampa Bay Lightning will battle the New York Rangers in Game 2 of the Eastern Conference finals at 8 p.m. Friday on ESPN. The Rangers own a 1-0 lead in that series.

The Edmonton Oilers will host the Colorado Avalanche in Game 3 of the Western Conference finals at 8 p.m. Saturday on TNT.

The Rangers-Lightning series continues with Game 3 at 3 p.m. Sunday on ESPN.

Memorial Tournament: Second round from 2 to 6 p.m. on Golf Channel

Tigers at Yankees at 7 p.m. on Apple TV+

Nationals league: Italy vs. Germany at 2:45 p.m. on FuboTV

MLS: Real Salt Lake at Vancouver at 7 p.m. on ESPN+

Cardinals at Cubs at 7 p.m. on Fox

Angels at Phillies at 7 p.m. on Fox

Cardinals at Cubs at 7 p.m. on ESPN

World Cup qualifier: Ukraine at Whales at noon on ESPN2

Friendly: Uruguay at USMNT at 5 p.m. on Fox 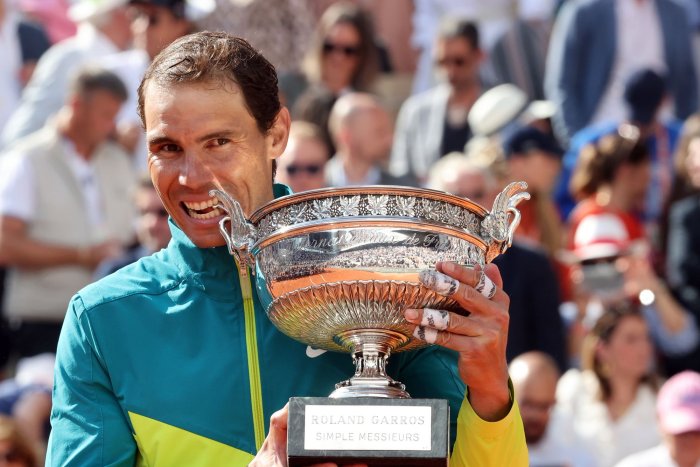