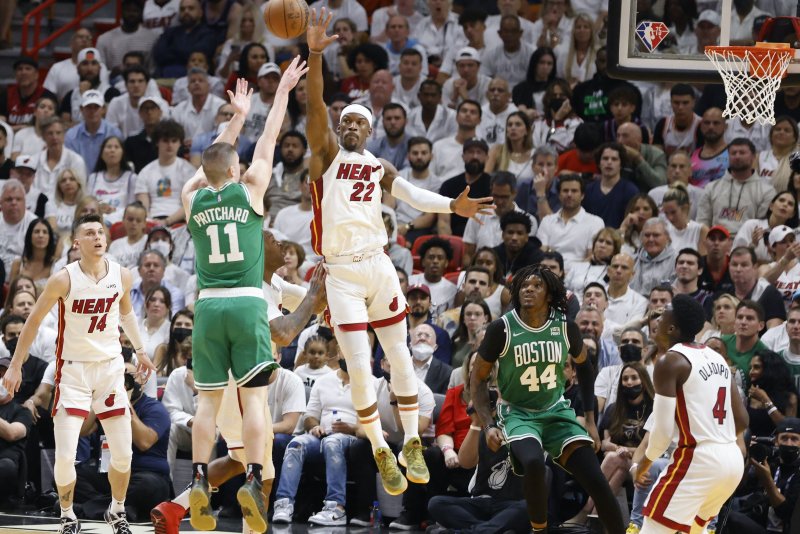 Miami Heat forward Jimmy Butler (22) made 12 of 19 field goals and 17 free throws for 41 points in a playoff win over the Boston Celtics on Tuesday in Miami. Photo by Rhona Wise/EPA-EFE

MIAMI, May 17 (UPI) -- Jimmy Butler poured in 41 points and the Miami Heat offense launched an explosive third-quarter comeback to beat the Boston Celtics 118-107 in Game 1 of the Eastern Conference finals on Tuesday at FTX Arena.

"It wasn't just one play, our group ignites from inspiration," Heat coach Erik Spoelstra said at his postgame news conference, when asked about Butler.

"Everybody was just really disappointed with our [first-half] effort and focus."

The Heat trailed 62-54 at halftime, but outscored the Celtics by 25 in the third to steal momentum. The Celtics made just 28.6% of their shots in the second half. Butler scored 27 over the final 24 minutes.

"We knew we had to play better at home as a team," Butler said. "This was just a win. it wasn't a really good win.

"It reminds me that we can do it. I expect us to be able to do that every quarter from here on out."

The Celtics, who played without starters Marcus Smart (injury) and Al Horford (COVID-19 protocol), went on a 7-0 run off the tip off. The Heat answered with with a 13-3 run, but the Celtics led 28-25 to end the quarter.

The Celtics went on a 11-2 run early in the second en route to their eight-point edge at the break. Celtics forward Jayson Tatum totaled 21 of his team-high 29 points through the first two quarters.

The Celtics went cold in the third, going 0 for 6 to start the second half. The Heat started the frame on a 22-2 run to flip the script. Miami outscored Boston 39-14 in the frame and led 93-76 to start the fourth.

Butler scored 17 in the third to ignite the Heat explosion. The Heat held onto its lead over the final 12 minutes to take a 1-0 series lead into Game 2.

"It was like what took us so long? That's what we gotta figure out," Heat forward P.J. Tucker said. "We gotta get to it faster."

Game 2 will tip off at 8:30 p.m. EDT Thursday at FTX Arena. Game 3 and Game 4 will be Saturday and Monday, respectively, in Boston.

The winner of the series will face the Golden State Warriors or Dallas Mavericks in the NBA Finals.

NBA // 1 day ago
Nuggets, Jokic agree to NBA-record $264M contract
July 1 (UPI) -- The Denver Nuggets and All-NBA center Nikola Jokic agreed to a five-year extension worth at least $264 million, the most lucrative pact in league history.

NBA // 3 days ago
Wizards to trade Caldwell-Pope, Smith to Nuggets for Barton, Morris
June 29 (UPI) -- The Washington Wizards agreed to trade Kentavious Caldwell-Pope and Ish Smith to the Denver Nuggets in exchange for Will Barton and Monte Morris, a league source told UPI on Wednesday.