May 5 (UPI) -- The NBA has suspended Grizzlies forward Dillon Brooks for one game without pay after his flagrant foul on Gary Payton II during Game 2 of Memphis' Western Conference semifinal series against the Golden State Warriors.

In a statement released Thursday, the league said Brooks made "unnecessary and excessive contact" on Payton. Brooks, who was ejected from Tuesday's Game 2 for the flagrant foul that fractured Payton's left elbow, will serve the suspension in Saturday's Game 3.

The 26-year-old Brooks was chasing down Payton from behind on a transition layup in Game 2 when he made contact with Payton's head while he was in the air, causing him to lose his balance. Payton was injured when he attempted to break his fall with his left hand.

ESPN previously reported that Payton is expected to miss about a month because of the elbow injury. He could return for the NBA Finals if the Warriors advance that far.

After Game 2, Warriors head coach Steve Kerr told reporters that it was a "dirty" play by Brooks.

"I don't know if it was intentional, but it was dirty," Kerr said. "There is a code. This code that players follow where you never put a guy's season [or] career in jeopardy by taking somebody out in midair and clubbing him across the head, ultimately fracturing Gary's elbow. ... He broke the code. Dillon Brooks broke the code."

Brooks has averaged 13.4 points across eight postseason games this year. He was the Grizzlies' second-leading scorer in the regular season, averaging 18.4 points in 32 games.

Meanwhile, Grizzlies center Steven Adams has cleared the NBA's COVID-19 health and safety protocols and could be available for Saturday's Game 3.

Adams practiced Thursday after missing the Grizzlies' first-round series finale against the Minnesota Timberwolves and the first two games against Golden State. 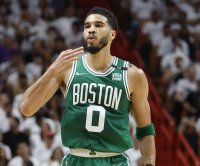 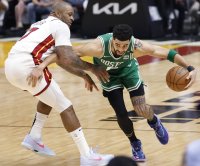 NBA // 4 days ago
Heat 'inspired' by Jimmy Butler's 41 points in Game 1 win vs. Celtics
MIAMI, May 17 (UPI) -- Jimmy Butler poured in 41 points and the Miami Heat offense launched an explosive third-quarter comeback to beat the Boston Celtics 118-107 in Game 1 of the Eastern Conference finals on Tuesday at FTX Arena.