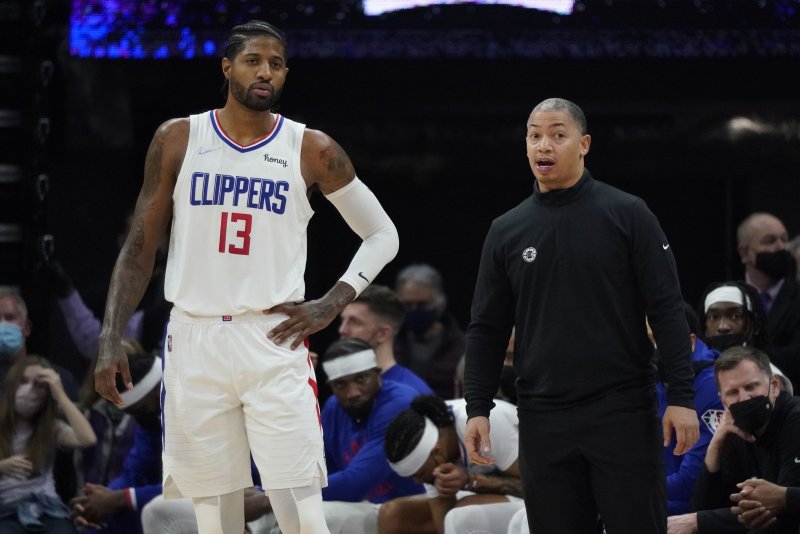 "We feel very bad for Paul," Frank told reporters. "This is another challenge for our group. ... We've dealt with challenges all year."

It is a significant blow to the Clippers, who are attempting to clinch the No. 8 seed in the Western Conference playoffs. The winner of the elimination game between the Clippers and Pelicans advances to the first round for a matchup against the top-seeded Phoenix Suns.

George was sidelined for three months with a torn ulnar collateral ligament in his right elbow. In total, he missed 51 games this season, with the Clippers posting a 24-27 record in his absence. Los Angeles had an 18-13 mark with him in the lineup.

He missed one of the Clippers' regular-season contests against the Pelicans, which New Orleans won by 24 points.

The 31-year-old George returned and competed in five regular-season games after his extended layoff. The Clippers have won six of their past eight matchups with a healthy George in the lineup.

The seven-time NBA All-Star selection averaged 24.3 points, 6.9 rebounds and 5.7 assists per game this season. He compiled 34 points, seven boards and five assists in the Clippers' 109-104 loss to the Minnesota Timberwolves on Tuesday in the play-in game for the No. 7 seed.

NBA // 4 hours ago
Wizards to trade Caldwell-Pope, Smith to Nuggets for Barton, Morris
June 29 (UPI) -- The Washington Wizards agreed to trade Kentavious Caldwell-Pope and Ish Smith to the Denver Nuggets in exchange for Will Barton and Monte Morris, a league source told UPI on Wednesday.

NBA // 5 days ago
NBA Draft 2022: Banchero, top picks ready to make quick impact
June 24 (UPI) -- Former Duke forward Paolo Banchero, the No. 1 overall pick in the 2022 NBA Draft, and other top picks all said they are ready to make a rapid impact for their respective new teams after they were selected in Brooklyn.

NBA // 6 days ago
NBA Draft: Smith, Holmgren, Banchero expected to be first picks
June 23 (UPI) -- Auburn's Jabari Smith Jr., Gonzaga's Chet Holmgren and Duke's Paolo Banchero are expected to be the first three picks of the 2022 NBA Draft, which tips off at 7:30 p.m. EDT Thursday at Barclays Center in Brooklyn.

NBA // 6 days ago
Blazers trade for Pistons forward Jerami Grant
June 23 (UPI) -- The Detroit Pistons traded forward Jerami Grant and a draft pick to the Portland Trail Blazers in exchange for picks in the 2022 NBA Draft and 2025 NBA Draft, a league source told UPI on Thursday.