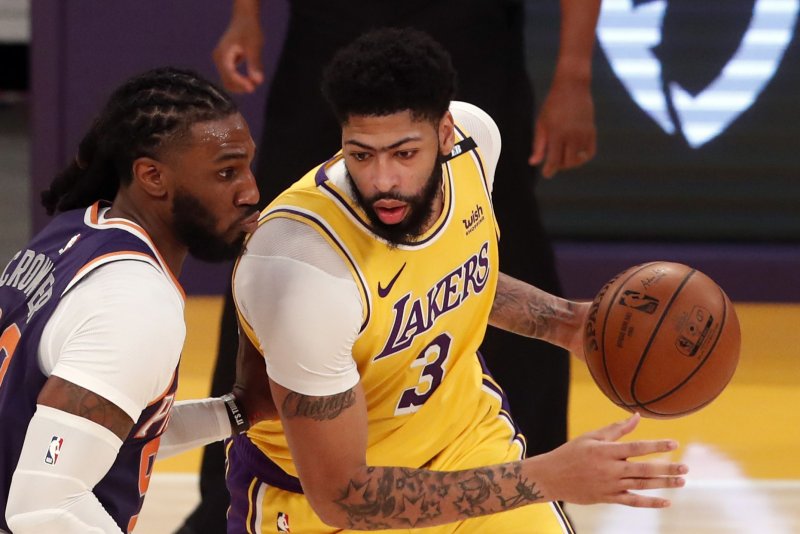 Feb. 17 (UPI) -- Los Angeles Lakers superstar Anthony Davis will be out for at least four weeks after an MRI revealed the All-Star big man has a mid-foot sprain.

Davis suffered the foot injury during the Lakers' 106-101 win over the Utah Jazz on Wednesday.

The 28-year-old Davis underwent X-rays after the Lakers' victory that showed no fracture, according to the team, but the MRI on Thursday revealed the sprain. The Lakers said team doctors will re-evaluate him in about four weeks.

Davis was injured when he jumped to catch a lob pass from teammate Malik Monk and landed on Rudy Gobert's heel in the second quarter. Davis' ankle bent outward and he collapsed to the floor, clutching at his lower right leg in visible pain.

Anthony Davis goes down grabbing his right ankle. He was helped off the court and headed straight to the locker room. pic.twitter.com/c60eXALIIl— Spectrum SportsNet (@SpectrumSN) February 17, 2022

The foot ailment marks another tough injury break for Davis, who missed 17 games from late December to late January because of a sprained MCL in his left knee.

The Lakers will have two games remaining in February after the NBA All-Star break. Los Angeles will then play nine games through March 18 -- the date in which Davis would be re-evaluated, according to the team's timeline.

Entering Thursday, the Lakers sat ninth in the Western Conference standings with a 27-31 record.

NBA // 4 days ago
Liz Cambage to 'step away' from WNBA for 'healing, personal growth'
Aug. 15 (UPI) -- Four-time All-Star Liz Cambage will "step away" from the WNBA so she can focus on healing and personal growth, she announced Monday on Instagram.

NBA // 1 week ago
Nets owner supports staff amid Kevin Durant trade demand
Aug. 9 (UPI) -- Brooklyn Nets owner Joe Tsai voiced support for the team's front office and coaching staff amid trade demands from Kevin Durant and a reported ultimatum the star player issued in order for him to stay with the team.