Oct. 18 (UPI) -- The NBA is projecting $10 billion in revenue for the upcoming 2021-22 season as audiences continue to return, a notable increase from the last two seasons when fan attendance was limited or disallowed due to the COVID-19 pandemic.

The NBA hasn't revealed revenue figures for its shortened 72-game season in 2020-21, but league commissioner Adam Silver told reporters Monday that revenue was down about 35% last year instead of the projected 40%.

"We lost significant amounts of money. The good news is we're able to take a long-term view of this business, and continue to grow in it," Silver said. "We try to look at it as an ongoing investment in the business over a long period of time as opposed to a loss of individual seasons."

The NBA is expecting to reach that revenue projection through jersey patch sponsorships, licensing deals and global outreach programs. Earlier this year, the league struck an equity deal with Fanatics for its trading card rights. The NBA also has a licensing deal with Dapper Labs for its NFTs collection.

Media rights make up about $2 billion of the NBA's total revenue. Corporate agreements with companies like Microsoft, Verizon and State Farm -- along with expanded business with Google -- could set up the NBA to surpass its record $1.46 billion in sponsorship money from last season.

The NBA, which is celebrating its 75th anniversary, is set to begin its 2021-22 season Tuesday with the defending champion Milwaukee Bucks taking on the Brooklyn Nets at Fiserv Forum in Wisconsin.

NBA // 1 hour ago
Heat 'inspired' by Jimmy Butler's 41 points in Game 1 win vs. Celtics
MIAMI, May 17 (UPI) -- Jimmy Butler poured in 41 points and the Miami Heat offense launched an explosive third-quarter comeback to beat the Boston Celtics 118-107 in Game 1 of the Eastern Conference finals on Tuesday at FTX Arena.

NBA // 17 hours ago
Kyrie Irving says he 'would've won' more titles with Cavs, LeBron; cites maturity
May 17 (UPI) -- Brooklyn Nets guard Kyrie Irving says he would have won more championships with LeBron James and the Cleveland Cavaliers if he had the "same maturity line" and understanding of himself he does now. 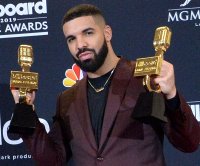 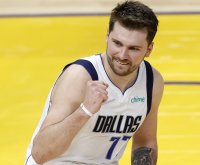 NBA // 1 day ago
Mavericks stun Suns with 33-point blowout, advance to conference finals
May 16 (UPI) -- All-NBA guard Luka Doncic scored a game-high 35 points and the Dallas Mavericks led by as many as 46 in a blowout of the Phoenix Suns in Game 7 of the Western Conference semifinals.

NBA // 4 days ago
Mavericks' Luka Doncic nets 33 to force Game 7 vs. Suns
May 13 (UPI) -- All-Star guard Luka Doncic scored a game-high 33 points to lead the Dallas Mavericks to a blowout win over the top-seeded Phoenix Suns in the Western Conference semifinals, forcing a Game 7 in the best-of-seven series.