Phoenix Suns guard Chris Paul said he is not retiring this off-season and hinted he could return to the same franchise for his 17th NBA season. File Photo by Jim Ruymen/UPI | License Photo

July 21 (UPI) -- Veteran guard Chris Paul didn't provide reporters with a ton of feedback when asked for his reaction to the Phoenix Suns' NBA Finals loss to the Milwaukee Bucks, but did announce his plans to return for a 17th season.

Paul scored a team-high 26 points in a Game 6 loss Tuesday in Milwaukee. The Bucks won the series 4-2 and denied the All-Star point guard of another chance to earn his first championship.

"I mean, it will take a while to process this or whatnot, but it's same mentality, get back to work," Paul said when asked if he thinks he can return to the NBA Finals.

The 11-time All-Star, 10-time All-NBA selection and nine-time All-Defensive Team selection joined the Suns in a November trade from the Oklahoma City Thunder.

Paul's contract features a player option of $44.2 million for the 2021-22 season. Suns players credited Paul with carrying the team to the Finals. Suns center Deandre Ayton said he would start to recruit his teammate to return next season.

"I mean, hopefully," Ayton told reporters, when asked about recruiting Paul. "At the same time, you know, [Paul], man, he taught everybody a lot. But mainly just coming to play, coming to compete and just approaching the game the right way with consistency, approaching it in a way where there ain't no mishaps. Almost try to be perfect."

Paul did not confirm if he would decide to pick up his option, or opt out, but did hint that he could return to Phoenix.

"For me it just means back to work," Paul said of the Finals loss. "Back to work. Nothing more, nothing less. Ain't no moral victories or whatnot.

NBA // 13 hours ago
Pelicans' Zion Williamson to be ready for regular season after foot surgery
Sept. 27 (UPI) -- New Orleans Pelicans star forward Zion Williamson sustained a broken right foot during the off-season but should be able to return in time for the start of the regular season. 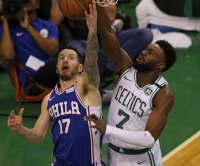