June 9 (UPI) -- Utah Jazz center Rudy Gobert has won the NBA's Defensive Player of the Year award for the third time in his career.

"It's unbelievable," Gobert said Wednesday after receiving the award for a third time. "When I started basketball as a kid, if somebody would have told me that I was going to be Defensive Player of the Year, I would have never believed them, let alone three times.

"It's hard to put into words the things that you can achieve when you just enjoy what you do, first of all, and when you have a group of people that believes in you and you put the work in every single day. I try to write my own story, try to enjoy my own journey, but just being one of only four guys that have won the award that many times, it's just amazing."

Gobert, who averaged 14.3 points, 13.5 rebounds and a career-best 2.7 blocks per game this season, also captured the award in 2018 and 2019 before Milwaukee Bucks star Giannis Antetokounmpo won it last year.

NBA // 15 hours ago
Clippers star Kawhi Leonard ruled out for Game 2 vs. Suns
June 21 (UPI) -- The Los Angeles Clippers will be without star forward Kawhi Leonard for Game 2 of the Western Conference Finals against the Phoenix Suns on Tuesday. 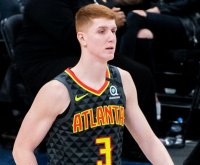