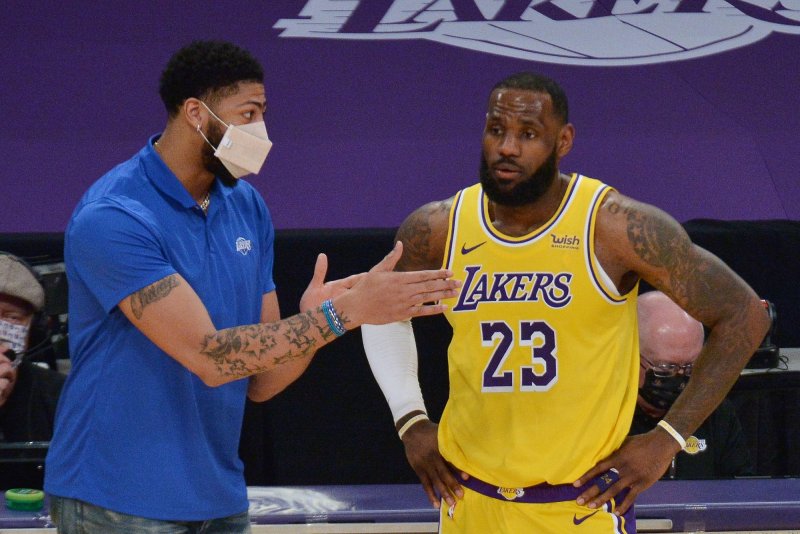 June 3 (UPI) -- Los Angeles Lakers star forward Anthony Davis has been cleared to play in Game 6 against the Phoenix Suns on Thursday night at Staples Center in Los Angeles.

The Lakers announced about 30 minutes before tipoff that Davis, who missed the entire second half of Game 4 and all of Game 5 because of a groin injury, will start in the win-or-go-home game.

LeBron James, Dennis Schroder, Kentavious Caldwell-Pope and Marc Gasol were listed as the Lakers' other starters for Game 6 against the Suns.

Lakers head coach Frank Vogel told reporters before the contest that the decision to play Davis would depend on the team's medical staff after they evaluated the eight-time NBA All-Star selection at the arena.

The Suns expected Davis, who averaged 34 points and 10.5 rebounds in the Lakers' two wins in the series, would be available in Game 6.

The seventh-seeded Lakers trail the No. 2 seed Suns 3-2 in the best-of-seven series. If the Lakers fall to Phoenix on Thursday, they would become just the sixth defending champion in league history to lose in the first round of the playoffs the following year.

The team said Conley will be re-evaluated before Game 1 of the Western Conference semifinals against the winner of the Los Angeles Clippers-Dallas Mavericks series.

Conley exited the top-seeded Jazz's series-ending Game 5 victory over the Memphis Grizzlies in the second quarter Wednesday after experiencing right hamstring soreness. He didn't return to that game.

The 33-year-old Conley averaged 17.4 points and 8.6 assists per game in the first-round series against his former team.

NBA // 4 hours ago
Stephen Curry scorches Clippers for 45, improves Warriors to 2-0
Oct. 22 (UPI) -- Stephen Curry erupted for 45 points -- with 25 in the first quarter -- to lead the Golden State Warriors to a narrow win over the Los Angeles Clippers in San Francisco.

NBA // 1 week ago
Griner, Taurasi lead Mercury over Sky, tie WNBA Finals 1-1
Oct. 14 (UPI) -- Brittney Griner scored a game-high 29 points and Diana Taurasi scored 18 of her 20 points in the second half and overtime to lead the Phoenix Mercury over the Chicago Sky in Game 2 of the WNBA Finals, tying the series.
Advertisement