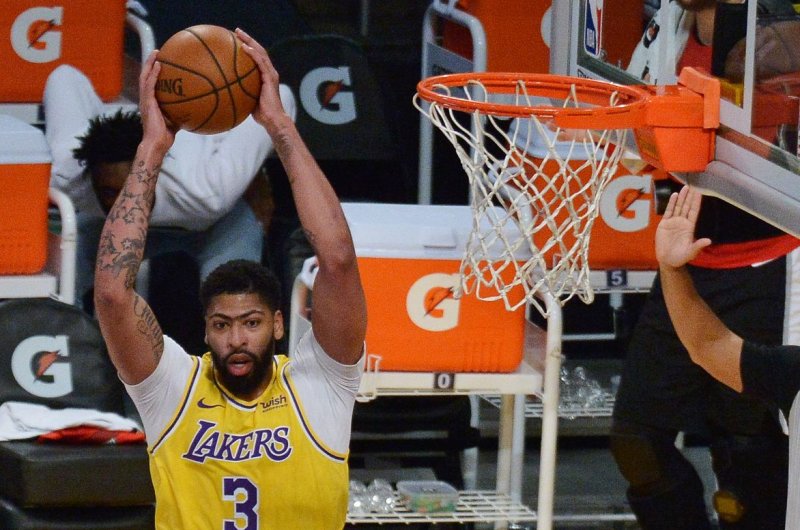 Anthony Davis has led the Los Angeles Lakers to back-to-back wins after the team dropped Game 1 of their Western Conference series against the Phoenix Suns. File Photo by Jim Ruymen/UPI | License Photo

May 28 (UPI) -- All-Star forward Anthony Davis recorded 34 points and 11 rebounds to carry the Los Angeles Lakers to a second straight win and a series lead over the Phoenix Suns through three games in the Western Conference matchup.

LeBron James chipped in 21 points, nine assists and six rebounds in the 109-95 victory Thursday at Staples Center in Los Angeles. The Lakers now own a 2-1 lead in the first-round series.

"We are finding our groove at the right time," Davis told reporters. "[James] set the tone for us. Guys followed his lead and started attacking. ... Guys stayed ready.

"He came out with a mindset to attack the basket and [we] followed suit."

The Suns led the Lakers 28-27 through the first 12 minutes. Both defenses tightened up as the Lakers outscored the Suns 16-12 in the second quarter. The Lakers led 43-40 at halftime, but snatched momentum for good in the third frame.

Davis scored 18 point and James chipped in 10 points in the third quarter. The Lakers outscored the Suns 33-23 in the frame to take a 76-63 edge into the fourth quarter. The Suns chipped away down the stretch, but couldn't cut the deficit to fewer than eight points.

Lakers guard Dennis Schroder scored 20 points in the win. The Lakers shot 44.2% from the floor in the victory. They outrebounded the Suns 51-35.

"[Davis] is ultra aggressive and he has been since Game 1," James told reporters. "We are going to need that to continue to happen. It's going to start with him. ... When he's aggressive we are all aggressive."

The Lakers host the Suns in Game 4 at 3:30 p.m. EDT Sunday at Staples Center. That game airs on ABC. The winner of the series battles the Denver Nuggets or Portland Trail Blazers in the second round. Denver leads that series 2-1.

NBA // 10 hours ago
NBA takes draft picks from Miami Heat, Chicago Bulls
Dec. 1 (UPI) -- The Miami Heat and Chicago Bulls each will forfeit their next available second-round picks in the NBA Draft because the violated league free agency rules, the NBA announced Wednesday.

NBA // 17 hours ago
Deandre Ayton leads Suns over Warriors for 17th straight win
Dec. 1 (UPI) -- Deandre Ayton totaled a game-high 24 points and 11 rebounds to lead the Phoenix Suns to a win over the Golden State Warriors and extend the team's franchise-record win streak to 17 consecutive games.

NBA // 2 days ago
Nuggets' Michael Porter to have potential season-ending back surgery
Nov. 29 (UPI) -- Denver Nuggets forward Michael Porter Jr. will undergo surgery on his lower back Wednesday, which could end his 2021-22 season.