The Miami Heat and coach Erik Spoelstra face an 0-2 deficit heading into Game 3 of an Eastern Conference playoff series against the Milwaukee Bucks. Photo by Tannen Maury/EPA

May 25 (UPI) -- Coach Erik Spoelstra challenged his team's level of physicality after the Milwaukee Bucks' destroyed the Miami Heat in Game 2 of their Eastern Conference playoff series to take a 2-0 lead into Game 3.

The Bucks outrebounded the Heat 61-36 in the 132-98 win Monday in Milwaukee. Bucks shooters made a playoff franchise-record 22 3-pointers in the 34-point blowout.

"They definitely set the tone for the game with their energy and pressure for 94 feet and playing a lot in transition," Spoelstra told reporters. "They are a great first-quarter team when they can get it rolling and clicking.

"That [rebounding] has to change, period. The first part of it is a physically aspect when the ball goes up."

"They imposed their will on us," Heat forward Jimmy Butler told reporters. "They did what they did best and got into transition.

"They made a lot of shots, but we didn't make anything difficult on them or take anything away. The game got out of hand pretty early."

RELATED Donovan Mitchell 'upset' at Jazz for sitting him in Game 1; cleared for Game 2

Despite the gloomy outlook of a 2-0 deficit, Butler and the Heat are confident they can fight back when the series returns to Miami on Thursday for Game 3.

"It's never that bad," Butler said of the Game 2 blowout. "Not saying it's all good either. We know what we have to do better. The bright spot is I don't think we can play any worse."

The Heat beat the Bucks 4-1 in the Eastern Conference semifinals last postseason. Butler said both teams are much different last postseason when it comes to style or roster construction. The Heat are 1-8 all-time in playoff series that start with an 0-2 deficit.

"We are down 0-2, but I'm excited because we have the opportunity to find out what we are made out of," Butler said.

The Heat host the Bucks in Game 3 at 7:30 p.m. EDT Thursday at American Airlines Arena in Miami. 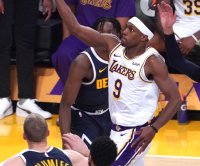