May 18 (UPI) -- Indiana Pacers guard Caris LeVert entered the league's COVID-19 health and safety protocols and was out for Tuesday night's NBA Play-In Tournament game against the Charlotte Hornets.

"I talked to him on the phone earlier today. Like I said, he's hurt. He's crushed," Pacers head coach Nate Bjorkgren told reporters. "He wants to be out there, especially with all he's gone through this year with the trade and the surgery and not joining us until after the All-Star break.

"And how he's been playing, he's been playing great. ... He was really gearing up and going to be ready for this one. We're going to miss him. He feels bad [that he can't play]. We just got to keep moving forward."

The Brooklyn Nets traded LeVert to the Pacers as part of the blockbuster James Harden deal earlier this year. LeVert's physical with the Pacers revealed a cancerous mass on his kidney that forced him to undergo surgery in January.

LeVert eventually made his debut for the Pacers in March.

The Pacers are the No. 9 seed in the Eastern Conference and hosted a win-or-go-home game against the 10th-seeded Hornets on Tuesday as part of the league's inaugural Play-In Tournament.

If the Pacers win Tuesday's game against Charlotte, they will face the loser of the Boston Celtics-Washington Wizards matchup for a chance at claiming the East's No. 8 seed and a first-round playoff series against the top-seeded Philadelphia 76ers.

NBA // 17 hours ago
Middleton, Antetokounmpo lead Bucks past Nets to force Game 7
June 18 (UPI) -- Giannis Antetokounmpo, Khris Middleton and the Milwaukee Bucks responded to a lopsided loss with a dominant Game 6 victory to force a Game 7 in their Eastern Conference Semifinals series against the Brooklyn Nets. 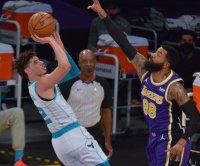