Philadelphia 76ers stars Joel Embiid and Ben Simmons (pictured) had close contact with a barber who has since tested positive for COVID-19. File Photo by John Angelillo/UPI | License Photo

League sources told ESPN and The Athletic that Embiid and Simmons had close contact with a barber who has since tested positive for COVID-19. The barber, who is located in the Philadelphia area, recorded a positive test after undergoing additional testing Sunday due to an inconclusive test.

"Prior to traveling to Atlanta, Philadelphia's Joel Embiid and Ben Simmons had contact with an individual who is confirmed today to have tested positive for the coronavirus," the NBA said in a statement. "As a result, Embiid [Team Durant] and Simmons [Team LeBron] will not play in tonight's NBA All-Star game."

Embiid and Simmons flew to Atlanta on private planes Saturday night and have remained in quarantine, which was the league's protocol for every All-Star participant.

Embiid is a member of Team Durant, while Simmons is on Team LeBron. The NBA said it has no plans to replace them because of the short amount of time between the announcement and the start of the All-Star Game. 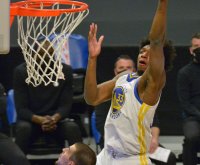