LeBron James scored a game-high 27 points for the Los Angeles Lakers in a win over the Denver Nuggets on Thursday in Los Angeles. File Photo by Jim Ruymen/UPI | License Photo

The game featured five lead changes and was tied six times before the Lakers finished off the Nuggets in the 114-93 triumph at Staples Center in Los Angeles.

"We all just try to do our part," James told reporters in a postgame Zoom video conference. "There are five guys on a string and we all try to work together.

Denver jumped out to a 30-27 lead in the first quarter. The Nuggets then outscored the Lakers 28-19 in the second quarter to earn a 58-46 lead at halftime.

The Lakers put together a few short runs to start the third quarter. They then ended the frame on a 15-0 run to take an 83-75 lead into the fourth quarter. Los Angeles outscored Denver 31-18 over the final 12 minutes to secure the win.

Lakers guard Dennis Schroder had 21 points in the win. Talen Horton-Tucker had 17 points for the Lakers. Anthony Davis and Montrezl Harrell scored 13 points apiece in the win.

"When we put our minds to it, we can do great things," Lakers coach Frank Vogel said. 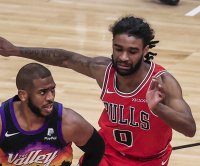 NBA // 2 days ago
Bulls' Coby White injures shoulder while away from team, out at least 4 months
June 10 (UPI) -- Chicago Bulls point guard Coby White suffered a significant left shoulder injury while away from the team and will miss at least four months after undergoing surgery to repair the ailment.

NBA // 2 days ago
Jazz guard Mike Conley not ready to return, will miss Game 2 vs. Clippers
June 10 (UPI) -- Utah Jazz veteran point guard Mike Conley was ruled out for Game 2 of the Western Conference semifinals against the Los Angeles Clippers on Thursday night due to a right hamstring strain.

NBA // 3 days ago
NBA playoffs: Charles Barkley rooting against 'super team' Nets, backs Suns
MIAMI, June 10 (UPI) -- Basketball Hall of Famer and analyst Charles Barkley says he roots against the Brooklyn Nets during playoff games and is "disgusted" by the effort of the Milwaukee Bucks in the Eastern Conference Semifinals.

NBA // 4 days ago
Mitchell scores 45 to lead Jazz over Clippers in Game 1 of Western semifinal
June 9 (UPI) -- All-Star guard Donovan Mitchell scored 32 of his game-high 45 points in the second half to help the Utah Jazz beat the Los Angeles Clippers Tuesday night and take a 1-0 lead in their Western Conference Semifinals series.
Advertisement