Brooklyn Nets forward Kevin Durant (7) and guard Kyrie Irving (11) return to the court following a timeout during the first half of a preseason game against the Washington Wizards on Sunday at Barclays Center in Brooklyn. Photo by Peter Foley/EPA-EFE

Dec. 13 (UPI) -- Brooklyn Nets star forward Kevin Durant, who spent almost two years rehabilitating a serious Achilles injury, returned to the basketball court for the first time in 552 days for a preseason game against the Washington Wizards on Sunday.

"I was anxious, nervous," Durant said after the game. "I visualized this moment for so long. Nine, ten months of thinking about how it would be -- this next phase of my career. I felt like I was chomping at the bit. Especially once COVID hit because I didn't see a future -- when the season was going to start in the future. I was going through it.

"So, to go through this felt solid."

The Nets' first points in the game came from a ferocious Durant dunk in the first quarter. He followed up his slam with an assist to center DeAndre Jordan.

Brooklyn went on to beat the Wizards 119-114 in the preseason game, which was Durant's first in a Nets uniform. He finished with 15 points, three rebounds and three assists in 24 minutes. He shot 5-of-12 from the field and added two blocks.

"It felt great, you know, to be back in a routine and get back on the floor and feel like a player again," Durant said. "I didn't think I played great. I felt I had some solid moments.

"... It's good to get back in the flow of things and it definitely gives me some confidence. It's a good step and I am trying to build on it."

The comeback is on.

Durant's last NBA action came in Game 5 of the 2019 NBA Finals. In that game, he went down with a ruptured Achilles tendon in his right leg. He was helped off the court in Toronto as some Raptors fans cheered about his injury.

The Raptors went on to win the NBA championship, and Durant moved from the Golden State Warriors to the Nets that summer. After signing a four-year, $164 million contract with the Nets in free agency, he sat out the entire 2019-20 campaign to fully recover from his Achilles injury.

Nets guard Kyrie Irving, who hasn't played since February after undergoing season-ending shoulder surgery, had 18 points on 7-of-9 shooting against the Wizards. The All-Star guard, who played for 18 minutes, declined to speak to reporters following the game.

NBA // 3 days ago
Toronto Raptors' Pascal Siakam has shoulder surgery, out 5 months
June 11 (UPI) -- Toronto Raptors forward Pascal Siakam likely will miss the start of next season after he underwent surgery to repair a torn labrum in his left shoulder. 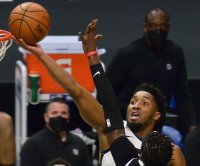 NBA // 4 days ago
Bulls' Coby White injures shoulder while away from team, out at least 4 months
June 10 (UPI) -- Chicago Bulls point guard Coby White suffered a significant left shoulder injury while away from the team and will miss at least four months after undergoing surgery to repair the ailment.

NBA // 4 days ago
Jazz guard Mike Conley not ready to return, will miss Game 2 vs. Clippers
June 10 (UPI) -- Utah Jazz veteran point guard Mike Conley was ruled out for Game 2 of the Western Conference semifinals against the Los Angeles Clippers on Thursday night due to a right hamstring strain.

NBA // 4 days ago
NBA playoffs: Charles Barkley rooting against 'super team' Nets, backs Suns
MIAMI, June 10 (UPI) -- Basketball Hall of Famer and analyst Charles Barkley says he roots against the Brooklyn Nets during playoff games and is "disgusted" by the effort of the Milwaukee Bucks in the Eastern Conference Semifinals.