According to the team's statement, Porzingis will start rehabilitation immediately with no set timeline to be cleared for basketball activities. According to ESPN, the Mavericks are optimistic that he will be able to take part in training camp, which will start at an undetermined date due to the delays caused by the coronavirus pandemic.

Porzingis weighed his options before opting to undergo the procedure, including having platelet-rich plasma injections with the hope that they would heal the meniscus.

Porzingis sustained the knee injury during the Mavs' Game 1 loss to the Los Angeles Clippers in the first round of the Western Conference playoffs. He fought through the ailment and played in the next two games of the series before the injury forced him to sit out.

The 25-year-old Porzingis averaged 20.4 points, 9.5 rebounds and two blocks per game during his first season with the Mavericks. The former New York Knicks star was coming off an ACL injury that sidelined him for all of the 2018-19 campaign.

In 243 career contests (242 starts) between the Knicks and Mavericks, Porzingis has averaged 18.4 points, 7.6 rebounds and two blocks per game. He was an All-Star selection in the 2017-18 season.

NBA // 6 days ago
Giannis leads Bucks past Suns for team's first NBA title since 1971
July 20 (UPI) -- Behind a 50-point performance by superstar Giannis Antetokounmpo, the Milwaukee Bucks beat the Phoenix Suns 105-98 in Game 6 of the NBA Finals on Tuesday night to capture their first championship in a half century. 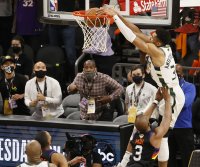