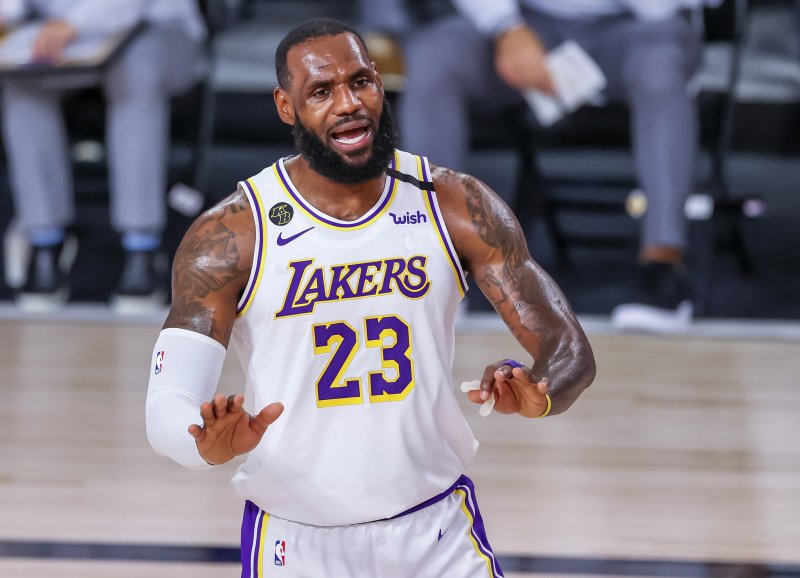 Los Angeles Lakers forward LeBron James set the NBA record for playoff wins at 162 with a victory over the Houston Rockets Tuesday in Orlando, Fla. Photo by Erik S. Lesser/EPA-EFE

Sept. 9 (UPI) -- LeBron James scored 36 points in 37 minutes Tuesday night to lead the top-seeded Los Angeles Lakers to a win over the Houston Rockets and a 2-1 lead in their Western Conference semifinal series.

James scored 29 of his points in the first half of the 112-102 triumph at the ESPN Wide World of Sports Complex at Walt Disney World Resort in Orlando, Fla. The four-time NBA MVP also had seven rebounds, five assists and four blocks.

"I am where I'd like to be from a rhythm standpoint and want to continue that," James told reporters. "It's all about just playing efficiently and doing whatever it takes to try and help our team win."

The game was tied 15 times and featured 16 lead changes. James Harden had 33 points, nine assists and nine rebounds while Russell Westbrook chipped in 30 points, eight rebounds and six assists for Houston in the loss.

"They did a good job of trapping us [in the second half] and we didn't make them pay for it," Harden said.

Westbrook scored 13 points in the first quarter to lead the Rockets to an early 33-32 edge. James responded with a 17-point effort in the next quarter, but the Lakers still trailed 64-61 at the break.

The Lakers tightened up their defense in the second half and held the Rockets to just 38 points over the final 24 minutes to secure the victory.

"We just weren't ourselves defensively in the first half," said Lakers forward Anthony Davis, who had 26 points, 15 rebounds and six assists in the win.

"We just tried to impose our will on the defensive end in the second half. We were able to do that, because that's a great team that can get hot at any time."

Rajon Rondo had 21 points and nine assists off the Lakers bench and Kyle Kuzma chipped in 14 points in the win. Jeff Green scored 16 points off the Rockets bench. Robert Covington and Eric Gordon chipped in 10 points apiece for Houston.

"The lift [James] gives us with superhero plays, you can't really put it into words," Lakers coach Frank Vogel said. "But he was doing it on both ends.

"This easily could have been a blowout if he wasn't hitting big shot after big shot."

Game 4 of the Western Conference semifinals series is scheduled for 7 p.m. EDT Thursday.

St. Vincent-St. Mary High School senior LeBron James (L) drives around a Zanesvuille defender in Akron, Ohio, on February 14, 2003. James is expected to be the No. 1 pick in the NBA draft. A couple months later, the Cleveland Cavaliers coach was suspended because James worked out with the team before he graduated from high school. Photo by Tom Cammett/UPI | License Photo

NBA // 1 month ago
Liz Cambage to 'step away' from WNBA for 'healing, personal growth'
Aug. 15 (UPI) -- Four-time All-Star Liz Cambage will "step away" from the WNBA so she can focus on healing and personal growth, she announced Monday on Instagram.
Advertisement