Wesley, who is known as "World Wide Wes" due to his relationships with numerous high-profile NBA players and owners, has served as a consultant in the coaching division of CAA for 13 years. He has a close relationship with Knicks president Leon Rose, who was hired by the franchise earlier this year.

"We are very excited to announce the hiring of William Wesley, someone that I have known for over 40 years and consider to be family," Rose said in a statement. "He is one of the most well-connected and respected people in the basketball community and he will be a tremendous asset and resource to both myself and the New York Knicks."

"My long history with and respect for [Knicks owner] Jim Dolan and Leon Rose, as well as the chance to be part of the New York Knicks, made this an opportunity I wanted to pursue," Wesley said. "I look forward to joining the current staff and moving the organization toward a successful future."

Congrats to William Wesley, my friend, brother and confidant for nearly 3 decades, on his job with the @nyknicks. He knows basketball on so many levels and there is no doubt his reach in the game is Worldwide! pic.twitter.com/iw7OY2pYFd— Scottie Pippen (@ScottiePippen) June 24, 2020

The Knicks also announced that Alex Kline and T.J. Zanin were officially hired as team scouts.

Zanin joins the Knicks after working as a regional scout for the Dallas Mavericks last season, while Kline spent the past four years with the New Orleans Pelicans as a scout and basketball operations assistant.

NBA // 1 day ago
Heat's Tyler Herro out for Game 4 vs. Celtics
MIAMI, May 23 (UPI) -- The Miami Heat will be without guard Tyler Herro for Game 4 of the 2022 Eastern Conference finals, the team said Monday. Herro sustained a groin injury in Game 3.

NBA // 2 days ago
Wiggins dunk on Doncic highlights Warriors playoff win vs. Mavericks
May 23 (UPI) -- The Golden State Warriors overcame a 40-point effort from Dallas Mavericks star Luka Doncic to take a 3-0 lead in the Western Conference finals. Andrew Wiggins headlined the win with a highlight-reel dunk on Doncic. 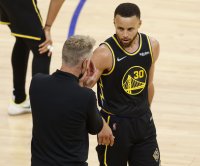 NBA // 6 days ago
Stephen Curry, Warriors cruise to Game 1 win vs. Mavericks
May 19 (UPI) -- Stephen Curry scored a game-high 21 points through three quarters to lead the Golden State Warriors to a 112-87 victory over the Dallas Mavericks in Game 1 of the Western Conference finals.

NBA // 1 week ago
Heat 'inspired' by Jimmy Butler's 41 points in Game 1 win vs. Celtics
MIAMI, May 17 (UPI) -- Jimmy Butler poured in 41 points and the Miami Heat offense launched an explosive third-quarter comeback to beat the Boston Celtics 118-107 in Game 1 of the Eastern Conference finals on Tuesday at FTX Arena.