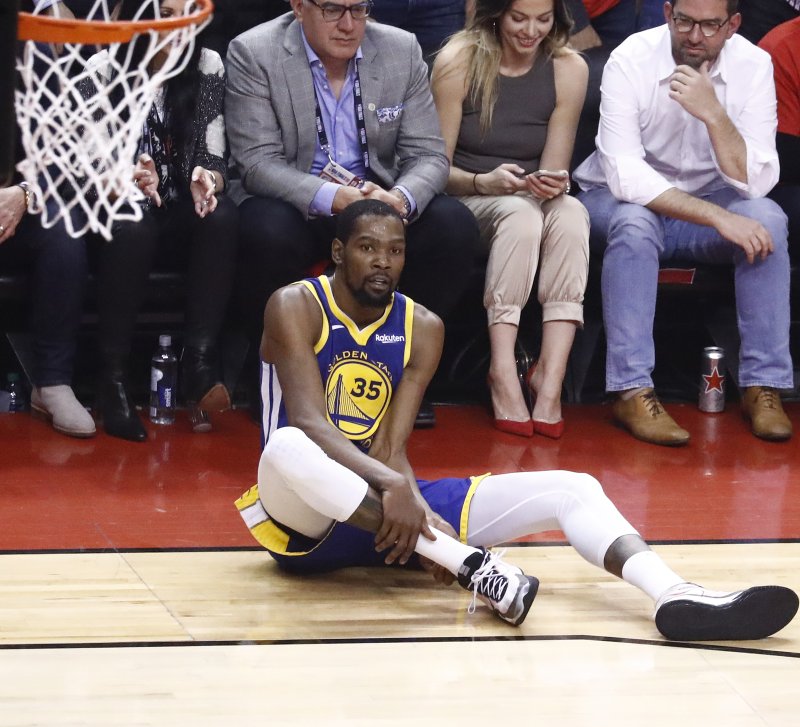 Former Golden State Warriors forward Kevin Durant signed with the Brooklyn Nets before the start of this season. He hasn't played since tearing his Achilles tendon during Game 5 of the 2019 NBA Finals. File Photo by Larry W. Smith/EPA-EFE

June 5 (UPI) -- Brooklyn Nets star forward Kevin Durant said Friday that he will not return for the 2019-20 NBA season when it resumes next month.

Durant, who signed a four-year, $164 million contract with the Nets before the start of this season, hasn't played since tearing his Achilles tendon during Game 5 of last year's NBA Finals while playing for the Golden State Warriors.

The two-time NBA Finals MVP will be one year removed from the injury when the Nets return to the court at the end of July in Orlando, Fla. With the 2019-20 season pushed back due to the coronavirus pandemic, there was speculation that Durant could potentially return this summer.

Durant, 31, said he feels much improved physically but doesn't believe he is ready to return yet.

"It's just best for me to wait," Durant told ESPN's The Undefeated on Friday. "I don't think I'm ready to play that type of intensity right now in the next month. It gives me more time to get ready for next season and the rest of my career. ... My season is over. I don't plan on playing at all.

"We decided last summer when it first happened that I was just going to wait until the following season. I had no plans of playing at all this season."

Durant also is fully recovered from COVID-19 after he tested positive for the virus in March. He is confident the NBA will have a safe and healthy environment for players and coaches when the season resumes.

"I was shocked. And then I was curious," Durant said. "I wanted to know what it meant. What is the virus about? I started to get information about it more and more. It calmed me down. ... I was just more curious to what I was dealing with and how I could fight it myself."

Durant is a two-time NBA champion and 10-time All-Star selection. He was named NBA MVP in 2014.