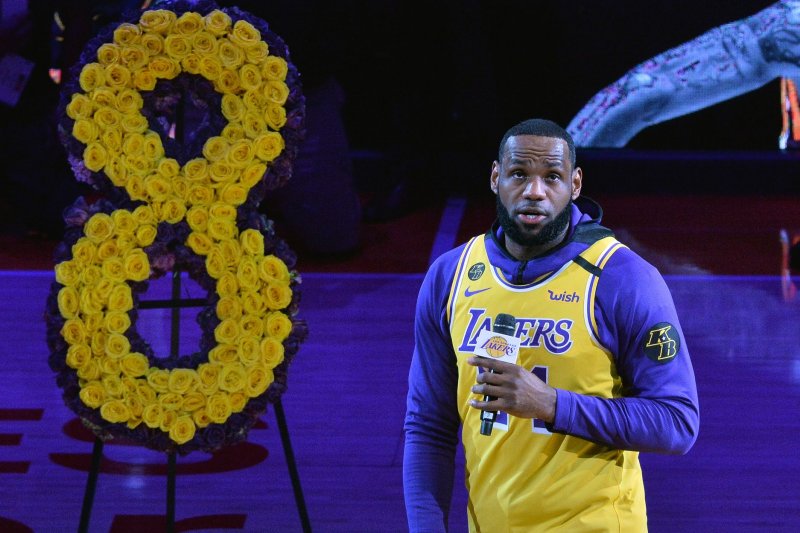 Los Angeles Lakers star LeBron James referred to the late Kobe Bryant as a "brother" and "the best dad" he has seen over the last three years during a pregame speech honoring Kobe before a game against the Portland Trail Blazers Friday in Los Angeles. Photo by Jim Ruymen/UP | License Photo

Los Angeles Lakers star LeBron James and the late Kobe Bryant played in the NBA together from 2003 through 2015. Photo by Jim Ruymen/UPI | License Photo

Los Angeles Lakers star LeBron James passed the late Kobe Bryant for third on the NBA's career scoring list a day before Kobe and his daughter Gigi were among nine who died in a helicopter crash in Calabasas, Calif. Photo by Jim Ruymen/UPI | License Photo

Feb. 1 (UPI) -- Los Angeles Lakers star LeBron James gave an emotional speech about the late Kobe Bryant and his daughter Gianna as the franchise honored the pair at Staples Center.

James teared up and paced the court as he delivered the moving speech prior to a 127-119 loss to the Portland Trail Blazers Friday in Los Angeles. He threw a piece of paper on the floor, which had the words he planned to say written on it, in favor of speaking from the heart.

"I got something written down, they asked me to kind of stay on course or whatever the case may be," James said. "But Laker Nation, man, I would be selling y'all short if I read off this [expletive] so I'm going to go straight from the heart."

The Lakers also paid tribute to Bryant and Gianna with a series of videos on the Staples Center big screen. Usher, Boyz II Men and Ben Hong performed for the crowd at Staples Center. Lakers players wore Bryant's No. 8 and No. 24 jerseys.

"Now, I know at some point, we will have a memorial for Kobe," James said, while standing at half court. "But I look at this as a celebration. This is a celebration of the 20 years of the blood, the sweat, the tears, the broken-down body, the getting up, the sitting down, the everything. The countless hours, the determination to be as great as he could be.

"Tonight, we celebrate the kid that came here at 18 years of age, retired at 38 and became probably the best dad we've seen over the past three years, man.

The Lakers star then dropped the microphone to the floor, mimicking what Bryant did during hist farewell speech from his final NBA game in 2016 in Los Angeles.

RELATED Vanessa Bryant on deaths of Kobe, Gianna: 'There aren't enough words to describe our pain'

Bryant and James' careers overlapped from 2003 through 2015. The two shared a rivalry while being among the league's best players. The tragic helicopter crash came one day after James passed Bryant for third on the NBA career scoring list.

Kobe was 41 years old. Gigi was 13. Kobe is survived by wife Vanessa and daughters Bianka, Natalia and Capri.