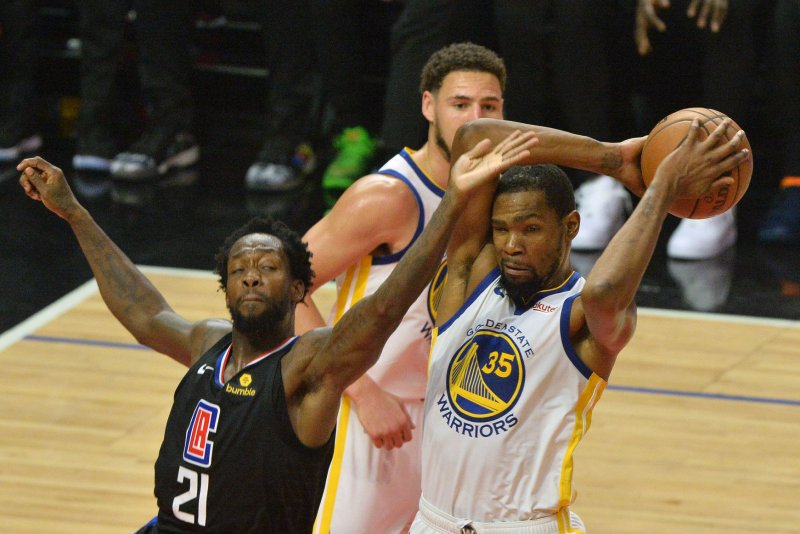 Golden State Warriors' forward Kevin Durant (35) has not played since injuring his calf against the Houston Rockets in the second round of the Western Conference playoffs. File Photo by Jim Ruymen/UPI | License Photo

June 6 (UPI) -- Golden State Warriors forward Kevin Durant will not play in Game 4 against the Toronto Raptors in the NBA Finals in Oakland on Friday evening.

Warriors coach Steve Kerr announced that Durant has not progressed enough from his ongoing calf injury, which occurred during the second round of the playoffs against the Houston Rockets.

"He will continue to get treatment and get on the court and continue to work, but will be unavailable for Game 4," Kerr said.

"He's been doing individual work on the court. He's been in the training room and the weight room. Training staff said he's not ready to play in a game yet."

The coach did say that forward Klay Thompson is expected to play after missing the Warriors' Game 3 loss to the Raptors with a sore hamstring.

Durant injured his calf May 8 in a win over the Houston Rockets in Game 5 of their best-of-seven series.

He missed the entire Western Conference Finals, won by the Warriors in four games to advance to their fifth straight NBA Finals.

Durant was averaging 34.2 points, 5.2 rebounds and 4.9 assists in 11 playoff games before his injury.

Kerr said that Durant has not regressed in trying to get back on the court to try to help the Warriors win their third straight NBA title.

"There was no setback," Kerr said. "The hope would be that he can still make it back at the end of the series."