Zion Williamson of Duke University looks at his award during ceremonies at the Missouri Athletic Club in St. Louis on April 15. Williamson is projected to be the No. 1 overall pick in next month's NBA Draft. File Photo by Bill Greenblatt/UPI | License Photo

The combine will take place from May 16-17 in Chicago. ESPN2 will provide live coverage.

Players will participate in five-on-five games, perform agility, shooting and strength drills, and meet with teams. Players also will received accurate measurements for their height, weight, and wingspan.

Williamson, who was listed as 6 foot 7 inches tall and 285 pounds by Duke, is projected by many draft outlets to be selected No. 1 overall in the NBA Draft. Williamson led Duke to the Elite 8 and joined Kevin Durant and Anthony Davis as the only freshmen to collect 500 points, 50 steals and 50 blocks in a season.

Williamson will likely be joined at the combine by ex-Duke teammates Cam Reddish and RJ Barrett. National champions De'Andre Hunter, Kyle Hunter and Ty Jerome of Virginia are also expected to participate.

The 2019 NBA Draft Lottery will take place in Chicago on Tuesday. The Cleveland Cavaliers, New York Knicks and Phoenix Suns hold the highest odds of earning the No. 1 pick. 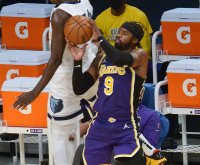