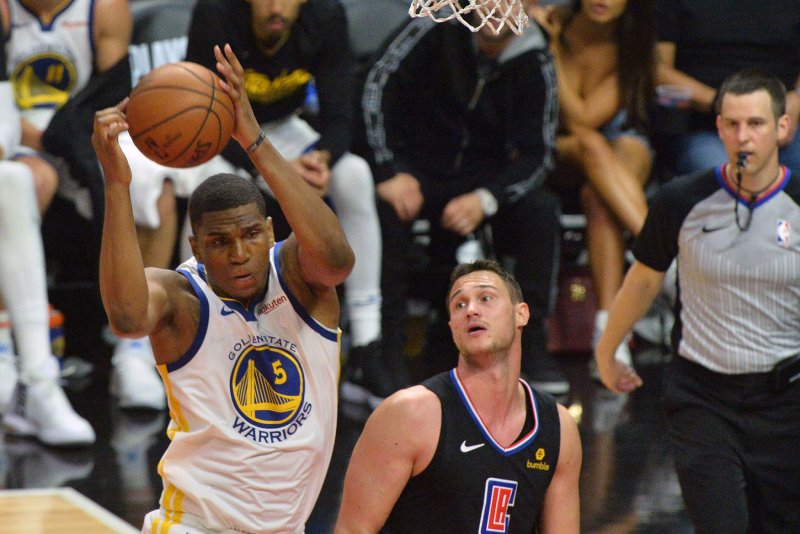 Golden State Warriors' forward Kevon Looney (5) grabs the offensive rebound away from Los Angeles Clippers' Danilo Gallinari (8) in the first half of Game 6 of the NBA playoffs at Staples Center in Los Angeles. Durant led the Warriors in the clinching win with 50 points. Photo by Jim Ruymen/UPI | License Photo

Golden State Warriors' forward Andre Iguodala jams for two points in the first half of game 6 of the NBA playoffs at Staples Center in Los Angeles on Friday. Kevin Durant scored 50 points as the Warriors closed out the Los Angeles Clippers 129-110 with the Game 6 win. Photo by Jim Ruymen/UPI | License Photo

Golden State Warriors' guard Stephen Curry (L) drives against Los Angeles Clippers' guard Lou Williams) in the first half of Game 6 of the NBA playoffs at Staples Center in Los Angeles on Friday. The Warriors got 24 from Curry in the team's 19-point win. Photo by Jim Ruymen/UPI | License Photo

Golden State Warriors' forward Kevin Durant (35) blocks the shot of Los Angeles Clippers' forward Danilo Gallinari (8) in the first half of game 6 of the NBA playoffs at Staples Center in Los Angeles on April 26, 2019. Durant added six rebounds and five assists with a block in the win. Photo by Jim Ruymen/UPI | License Photo

April 27 (UPI) -- Kevin Durant scored 50 points to lead the Golden State Warriors to a 129-110 win over the Los Angeles Clippers on Friday to advance in the NBA playoffs.

Durant could not be stopped no matter what the Clippers did, scoring 30 points in a 17-minute stretch. During that stretch, he missed just three shots, and added six rebounds and five assists.

"It was one of the great performances I've ever seen in my life," Warriors coach Steve Kerr said of Durant.

"I've seen some good ones, been around some decent players. He just carried us these last couple games of the series. He's the ultimate weapon because there's no defense for Kevin. No matter what anybody does, he can get a good shot.

"He knew we needed him badly, and he just took over the game in the first half and set a great tone."

The Clippers, who won games two and five, admitted they just had no answers for stopping Durant.

"We had several different coverages for KD, and sometimes you come across special people and it doesn't matter what you send to them.

"There's no scheme. There's no defense, no nothing that you can do with special people. He's one of them, and he showed it tonight."