Kyle Lowry and the Toronto Raptors have a first-round playoff matchup against the Orlando Magic, starting Saturday in Toronto. File Photo by Nicole Sweet/UPI | License Photo

April 11 (UPI) -- The NBA postseason field is locked in following the final games of the 2019 regular season.

The Detroit Pistons needed all 82 games to secure a spot, clinching the No. 8 seed in the Eastern Conference with a win against the New York Knicks on Wednesday at Madison Square Garden in New York City.

But Detroit wasn't the only franchise to narrowly earn its spot in the playoffs. The Brooklyn Nets beat the Miami Heat on Wednesday in Brooklyn, claiming the No. 6 spot in the Eastern Conference. The Orlando Magic also won to earn the No. 7 seed.

The No. 3 seed Philadelphia 76ers tip-off against the Nets in the first game of the 2019 playoffs. That Eastern Conference clash begins at 2:30 p.m. Saturday at the Wells Fargo Center in Philadelphia.

The second game of the 2019 postseason slate is a clash between the Magic and No. 2 seed Toronto Raptors. That game tips off at 5 p.m. Saturday in Toronto.

Two first-round Western Conference games are scheduled for Saturday. The No. 1 seed Golden State Warriors host the No. 8 Los Angeles Clippers at 8 p.m. in Oakland. The No. 2 seed Denver Nuggets host the No. 7 San Antonio Spurs at 10:30 p.m. in Denver.

NBA // 5 days ago
Griner, Taurasi lead Mercury over Sky, tie WNBA Finals 1-1
Oct. 14 (UPI) -- Brittney Griner scored a game-high 29 points and Diana Taurasi scored 18 of her 20 points in the second half and overtime to lead the Phoenix Mercury over the Chicago Sky in Game 2 of the WNBA Finals, tying the series. 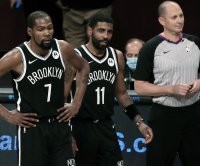