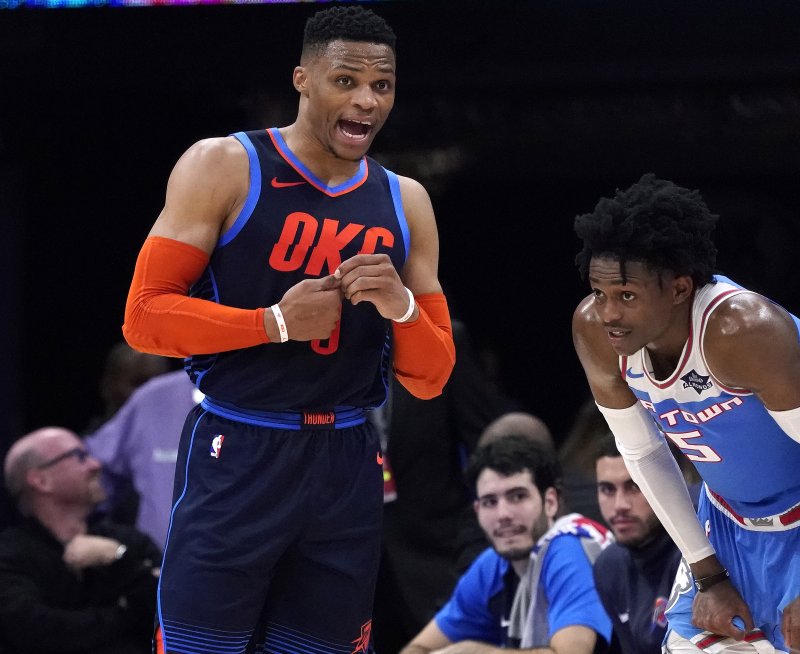 Oklahoma City Thunder guard Russell Westbrook (L) was the target of derogatory comments from Jazz fans in 2018 and during Monday's game against Utah. File Photo by John G. Mabanglo/EPA-EFE

Sources informed the Deseret News on Friday that the Jazz issued a permanent ban to a fan after he addressed Westbrook as "boy."

The incident occurred before Game 4 of the Thunder's first-round playoff series against the Jazz, according to the Deseret News. In a video that has circulated on social media, the fan is heard directing the degrading term at Westbrook.

"Don't call me boy," Westbrook warned the Jazz fan before he repeated the word seconds later. The Thunder guard motioned for security to handle the fan.

After the video became public on social media Tuesday, the organization investigated and tracked down the unnamed fan, barring him from any future Jazz game.

The team previously banned Utah resident and Jazz fan Shane Keisel for his verbal altercation with Westbrook. The organization issued a lifetime ban to Keisel for making degrading comments to Westbrook during Monday's game at Vivint Smart Home Arena.

"I am extremely disappointed that one of our quote 'fans' conducted himself in such a way as to offend not only a guest in our arena, but also me personally, my family, our organization, the community, our players and you, as the best fans in the NBA," Miller said. "This should never happen. We are not a racist community. We believe in treating people with courtesy and respect as human beings.

"We have a code of conduct in this arena. It will be strictly enforced."

The NBA fined Westbrook $25,000 after the incident. Jazz players, including Rudy Gobert and Donovan Mitchell, have publicly supported Westbrook.