LeBron James dunks the ball against Team Giannis during the NBA All-Star basketball game on All-Star Weekend on Sunday at the Spectrum Center in Charlotte, N.C. James had 19 points in the win. Photo by John G. Mabanglo/EPA-EFE

Feb. 18 (UPI) -- Dwyane Wade rekindled some of his memories with LeBron James from their Miami Heat days with an off-the-backboard alley-oop at the 2019 NBA All-Star Game.

The play came in the third quarter of Team LeBron's 178-164 win against Team Giannis on Sunday in Charlotte, N.C.

Team Giannis led 101-87 with about 10:30 remaining in the frame when Golden State Warriors star Kevin Durant secured a steal. Durant looked up the court and quickly fired a pass up to Wade, who was running down the left flank. Wade looked back to see a trailing James before throwing the ball off of the backboard.

James came flying in and caught the ball, before slamming it through the rim with both hands.

"My only goal All-Star Weekend is to try to throw LeBron one lob because that's what everybody wants to see," Wade told the Miami Herald before the game.

It had to happen once last time...

"It meant everything," James told reporters. "Like I have been saying the last couple of days, it has been a bittersweet moment with me for him. The bitter part is that this is our last time being on the same floor together and playing the game we love so much." 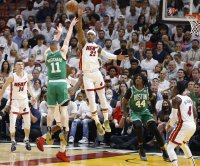