Harden had his 30th consecutive game with 30-plus points, while Westbrook picked up his 10th straight triple-double Monday night to surpass Hall of Fame center Wilt Chamberlain's record.

Jordan disclosed that both players are on historic runs and it benefits the game of basketball.

"They're both hard," Jordan told reporters. "It shows the talent we have within the league. It shows progression in the league. I am very proud of how both guys have done because they are making a mark for the league and I think it really helps grow the league."

The six-time champion with the Chicago Bulls added that one feat is tougher to accomplish.

"Which is harder from a player's standpoint? Six championships by all means," Jordan said with a grin.

Harden used a fourth-quarter scoring spree to extend his streak to 30 games Monday night. He scored 11 points in the final 100 seconds as the Rockets defeated the Dallas Mavericks 120-104.

Westbrook finished with 21 points, 14 rebounds and 11 assists in the Thunder's 120-111 victory over the Portland Trail Blazers.

Both players were All-Star selections and will play in the annual All-Star Game this weekend in Charlotte.

NBA // 1 hour ago
Kevin Durant logs historic triple-double, carries Nets over Bucks
June 16 (UPI) -- Kevin Durant showed why he is arguably the best basketball player on the planet with a 49-point, 17-rebound, 10 assist triple-double performance to lead the Brooklyn Nets to a vital playoff win over the Milwaukee Bucks. 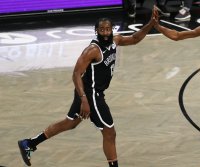 NBA // 23 hours ago
76ers' Joel Embiid "won't be 100%" until off-season as Hawks tie series
June 15 (UPI) -- All-Star center Joel Embiid says he won't be 100% healthy until the off-season after he struggled to produce over long stretches during the Philadelphia 76ers' Game 4 loss to the Atlanta Hawks.

NBA // 1 day ago
Kawhi Leonard, Paul George lift Clippers over Jazz in Game 4
June 15 (UPI) -- Kawhi Leonard and Paul George poured in 31 points apiece to lead the Los Angeles Clippers to a Game 4 victory against the Utah Jazz to tie the Western Conference Semifinals series at 2-2.