Los Angeles Lakers guard Josh Hart (3) will be out until after the All-Star break after receiving a PRP injection in his knee Monday. File Photo by John Angelillo/UPI | License Photo

The team declared that Hart will be re-evaluated after the All-Star break.

Hart was dealing with knee soreness for several weeks and missed practice time and games. He didn't play in the Lakers' 143-120 loss Sunday against the Philadelphia 76ers and missed last Tuesday's 136-94 defeat versus the Indiana Pacers.

Hart missed both games because of patella tendinitis.

The Lakers are already without guard Lonzo Ball, who suffered a sprained left ankle against the Houston Rockets on Jan. 19. Los Angeles ruled Ball out for 4-6 weeks.

Rajon Rondo and Lance Stephenson will have increased roles due to the absences of Hart and Ball in the backcourt. 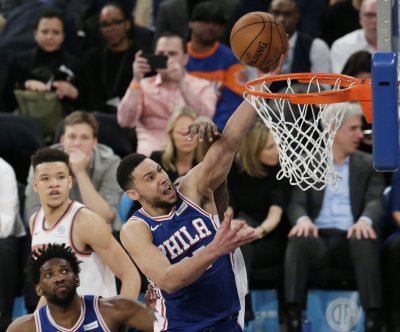 NBA // 17 hours ago
76ers' Ben Simmons to miss at least two weeks with nerve issue in lower back
Feb. 25 (UPI) -- Philadelphia 76ers star Ben Simmons will be out for an extended period of time due to a nerve impingement in his lower back.