Golden State Warriors veteran Andre Iguodala managed to move around 7-footer Pau Gasol while in midair for a big dunk in the second quarter of a win against the San Antonio Spurs on Wednesday at Oracle Arena in Oakland. File photo by Jon SooHoo/UPI | License Photo

Iguodala's aerial attack came in the second quarter of the Warriors' 141-102 win against the Spurs on Wednesday at Oracle Arena in Oakland. The Warriors led the Spurs 33-31 with about 11:30 remaining in the first half.

Draymond Green threw a pass over to Klay Thompson during the sequence. Thompson then hit Iguodala with a bounce pass as he rolled to the rim after a screen. Iguodala had a wide open path to the paint and he took advantage of the Spurs' defensive lapse.

The Warriors veteran caught the pass before elevating over the paint. Gasol slid over to defend, but was no match for Iguodala's athleticism.

Iguodala went up strong, but was able to move the ball around Gasol's outstretched right arm. He floated through the air and came back toward the rim for a two-handed jam over the 7-footer.

"Iggy" had 11 points, six rebounds and four assists in 19 minutes off of the bench in the victory. Thompson led the Warriors with a game-high 26 points. Kevin Durant chipped in 23 points, nine assists, eight rebounds and three steals for the Warriors.

Gasol had just one point, two rebounds, an assist and a block in the loss. Patty Mills led San Antonio with 16 points.

The Warriors had 42 assists in the win. Golden State battles the Phoenix Suns at 9 p.m. on Friday at Talking Stick Resort Arena in Phoenix. The Spurs face the Portland Trail Blazers at 10:30 p.m. on Thursday at Moda Center in Portland. 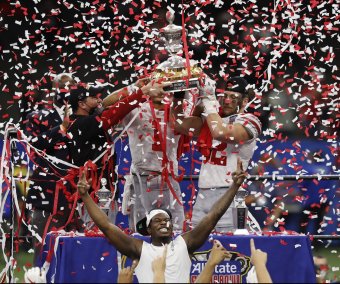