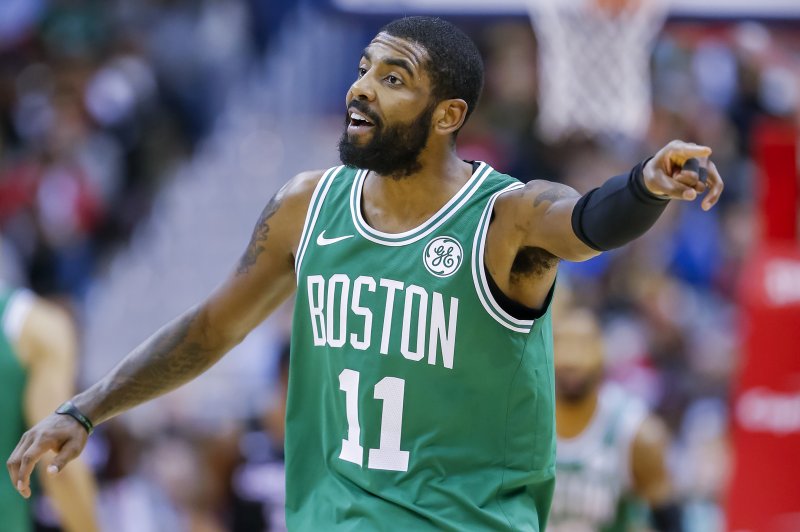 Thunder guard Russell Westbrook had his sixth consecutive triple-double with 22 points, 16 assists and 12 rebounds, but had a costly turnover late in the game.

With 8.1 seconds left in the fourth quarter, Irving caused Westbrook to fumble the ball, which fell into Celtics center Al Horford's hands. Jayson Tatum and Marcus Smart knocked down two free throws each to ice the game.

"Kyrie was great because he kind of got in Westbrook's way and might have even tipped it," Horford told reporters. "That was a big stop for us."

We snagged a huge steal during the final seconds to swing the momentum in our favor before we downed OKC. pic.twitter.com/p7BR7f7TaB

Thunder guard Paul George led the team with a game-high 37 points on 11-of-27 shooting. He added four rebounds and four assists.

The Thunder host the Orlando Magic on Tuesday night, while the Celtics visit the Cleveland Cavaliers on Tuesday.

Kyrie Irving shifts on prior commitment to Celtics Barkley: League should not allow a Davis trade to Lakers Jazz center Rudy Gobert breaks down in tears after All-Star snub

NBA // 3 days ago
Nuggets, Jokic agree to NBA-record $264M contract
July 1 (UPI) -- The Denver Nuggets and All-NBA center Nikola Jokic agreed to a five-year extension worth at least $264 million, the most lucrative pact in league history.

NBA // 5 days ago
Wizards to trade Caldwell-Pope, Smith to Nuggets for Barton, Morris
June 29 (UPI) -- The Washington Wizards agreed to trade Kentavious Caldwell-Pope and Ish Smith to the Denver Nuggets in exchange for Will Barton and Monte Morris, a league source told UPI on Wednesday.