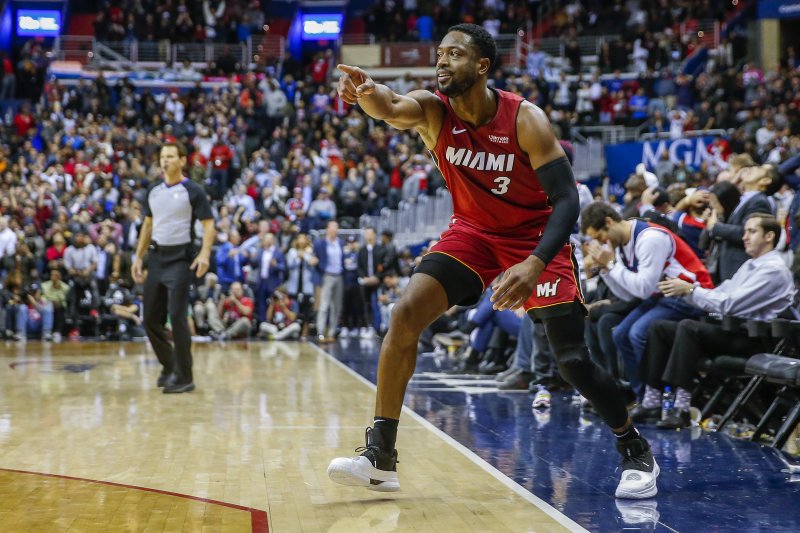 Miami Heat guard Dwyane Wade had 11 points, three assists and four rebounds in a loss to the Atlanta Hawks on Sunday at State Farm Arena in Atlanta. Photo by Erik S. Lesser/EPA-EFE

Jan. 7 (UPI) -- Miami Heat star Dwyane Wade turned back the clock with a smooth alley-oop dish to Derrick Jones Jr. during a loss to the Atlanta Hawks.

Wade's wicked feed came in the first quarter of the 106-82 setback on Sunday at State Farm Arena in Atlanta. The Heat trailed 18-12 when Jones sprinted up the court in transition. He threw a pass from half court, finding Wade open in the paint.

But instead of finishing with a shot, Wade drove toward the hoop and blindly threw the ball backwards. Jones was trailing on the play and was able to catch the ball for a big two-handed slam.

"Yeah, just ahead of the crowd and once the ball came to me a little slow, I knew the defense had a chance to recover," Wade told reporters. "I looked back to D-Jones and I seen he had a step on his man."

"You guys know, I played with a player that once he had a step on his man, you could just throw it anywhere. So yeah, threw it back and I didn't even see what happened. I just threw it back and heard the crowd. But that guy could jump through the roof. So just trying to do something for the fans tonight. So that was the moment we gave them."

Wade had 11 points, three assists and four rebounds in the loss. He also netted his 500th career 3-pointer in the loss. Jones led the Heat with 14 points. Trae Young netted a game-high 19 points for the Hawks.

Wade, 36, is averaging 14 points, 3.9 assists and 3.6 rebounds per game in his final NBA season. The Heat host the Denver Nuggets at 7:30 p.m. on Tuesday at American Airlines Arena in Miami.