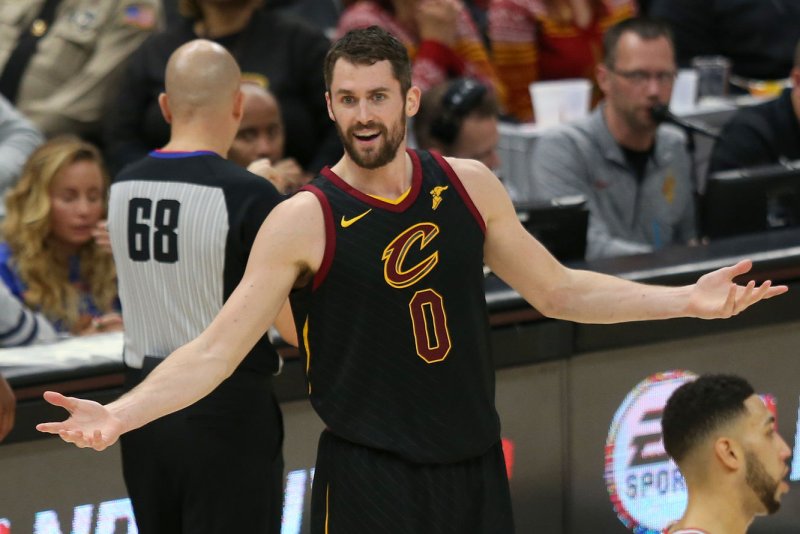 Cleveland Cavaliers power forward reacts to a call in a game against the Chicago Bulls last season. Photo by Aaron Josefczyk/UPI | License Photo

Jan. 4 (UPI) -- The NBA trade deadline is a month away, which can only mean one thing -- it's time to fire up the Kevin Love rumors.

Actually, it's time for opposing teams to start calling the Cleveland Cavaliers and asking about Love, an All-Star power forward on an otherwise young squad that's trying to find its way.

We also know Love is supposed to return from foot surgery sometime this month. He is eligible to be traded Jan. 24 after signing a four-year contract extension in the offseason. The trade deadline is Feb. 7.

Will he stay or will he go? When it comes to Love, Cavs coach Larry Drew admitted he doesn't even know.

"As far as trades are concerned, I understand the nature of this business. Anybody can be traded," Drew told reporters after practice Thursday. "I've been in this league long enough where I've seen that happen. I think any deal that makes sense for any team, sure, they'll be willing to pull the trigger. But that's just the nature of our business.

"Around this time is always an exciting time because you start hearing names floating around, all the possibilities and the probables and the what-ifs and 99 percent of the time none of it happens.

"Trade deadline time is always, as a player you get a little antsy. When I played, I got a little antsy because there was always the possibility. That's just how the business is, that deadline, people get excited, things start floating around and that's just how it is."

Love played in just four games before his painful toe put him on the shelf. Opposing teams are a bit concerned with Love's extensive injury history, sources said, though that may not keep a contender from taking chance.

Any team in win-now mode could use a player such as Love. He's 6-foot-10, consistently among the league's top rebounders, can score from inside or out and may be the best outlet passer since the long-gone days of Moses Malone.

He's not a great defender, but when clicking, Love can outscore his man nearly every time.

There will be interest, and it will be high. It will be up to Cavs general manager Koby Altman and his staff to determine if the forthcoming offers are a steal.

If the Cavs are to trade Love, it will be for a young player or players who can get the fans buzzing, and a first-round draft pick or picks. (Because of Love's contract, the Cavs will also need to take back a larger deal, likely belonging to an older veteran.)

No matter, the Love talk has already arrived, and the Cavs clearly have no intention of running from it.

But it should also be noted they aren't feeling desperate to move him. In fact, when it comes to Drew, it's quite the opposite.

"Let's face it, he's our main guy. He's our go-to guy," Drew said. "He's the guy we're going to put the ball in his hands at the end of the game. He does so much because he has that, being a guy his size he can step up to the 3-point line. You can post him. He gets to the foul line. We haven't had that all year.

"Getting him back, it will be a great welcome. Hopefully it will be sooner than later."

This article originally appeared on AmicoHoops.net