Josh Richardson and the Miami Heat take on the Brooklyn Nets on Tuesday. Photo by Alex Edelman/UPI | License Photo

MIAMI -- The Miami Heat haven't recovered since LeBron James bolted for free agency in the summer of 2014.

James once again showed the Heat what they've been missing, raining 51 points down on Miami in Sunday night's 113-97 Los Angeles Lakers victory.

That marked Miami's fourth straight home loss, an embarrassing streak that the Heat (6-10) will try to break on Tuesday, when the Brooklyn Nets (7-10) visit.

The Nets are actually playing better on the road (4-6) than Miami is at home (3-6) so far this season.

But just like the Heat are reeling from that James decision, Brooklyn has been lost in a downward spiral since the Nets' 2013 trade that sent three first-round picks to the Boston Celtics for aging and long-gone stars Kevin Garnett, Paul Pierce and Jason Terry.

More recently, the Nets were hit with a major injury as 6-7 shooting guard Caris LeVert dislocated his right foot on November 12 and will likely be out for several months.

LeVert leads the Nets in scoring (18.4 points per game) and had already produced seven games with at least 20 points so far this season.

"Anytime you lose arguably your best player, it's going to be a letdown," said Spencer Dinwiddie, Brooklyn's backup point guard. "But we have a lot of talent in our locker-room. Our season didn't end because he got hurt.

"He's our brother. We hurt for him. But we're going to keep playing until he gets back."

The Heat is hoping to get a couple of key players back soon as well. Starting point guard Goran Dragic missed Sunday's loss to the Lakers due to an injury to his right knee. Backup shooting guard Dwyane Wade, a legend who is playing his final NBA season, has missed seven straight games while on extended paternity leave.

It's possible Wade could return to face the Nets, which would be a big boost.

The Heat on Sunday got a bit healthier as forward James Johnson made his season debut. He had been out after hernia surgery.

But Dragic's injury hangs over the Heat's desire to get into playoff contention. He missed two games, played four and then sat out against the Lakers.

"He's sore and a little bit swollen," Heat coach Erik Spoelstra said of Dragic. "His knee hasn't responded the way we had hoped."

The Heat could be looking at an extended rest to get Dragic right. Perhaps reserve guard Tyler Johnson could step up in Dragic's absence. Wade could help, too.

Miami will get tested at the point as D'Angelo Russell, who is averaging 17.2 and 5.5 assists, could take advantage of Dragic's departure from the lineup. Dinwiddie, Brooklyn's backup point guard, is the Nets' third-leading scorer at 14.6 points.

The Nets, who have lost four of their past five games, would love to avenge a 120-107 home defeat suffered against the Heat last Wednesday. Tyler Johnson led Miami with 24 points in that game, and Dragic added 21.

Brooklyn was without starting center Jarrett Allen, who will be available this time around. 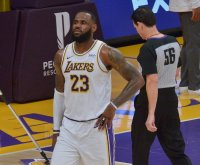 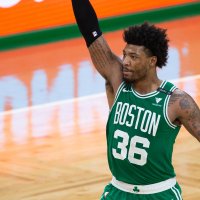