Philadelphia 76ers guard Markelle Fultz scored five points and had five assists in 24 minutes against the Miami Heat on Monday at AmericanAirlines Arena in Miami. Photo courtesy of the NBA

Nov. 13 (UPI) -- Markelle Fultz left a lot to be desired during a free throw attempt during the Philadelphia 76ers' win against the Miami Heat.

He pump faked the shot before banging it off of the rim.

Fultz's folly came with 7:35 remaining in the first half of the 76ers' 124-114 victory on Monday at AmericanAirlines Arena in Miami. The No. 1 overall pick in the 2017 NBA Draft scored five points and had five assists in 24 minutes of action.

Fultz went to the line after being fouled by Josh Richardson while making a finger roll layup. He stepped up for his only attempt and took a few dribbles before crouching and eying the rim. Fultz went up to release the ball, but instead held it in his hands.

Several players crashed into the paint, fooled by Fultz's mistake. The ball hit the back iron and fell to the floor, preserving Miami's 46-44 advantage at the time.

Fultz told reporters after the game that the ball slipped out of his hand.

"I mean, the ball slipped out of my hand, so I had to do what I had to do," Fultz told ESPN and the Philadelphia Inqurier. "But I'm not really worried about it. I work on my game. The ball just happened to slip. That's what happened."

Fultz, 20, hit 47 percent of his free throws last season. He is hitting them at a 57 precent clip in 2018. The shooting guard is also shooting 41 percent from the floor and 30 percent from 3-point range. 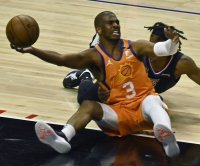 NBA // 3 days ago
Giannis leads Bucks past Suns for team's first NBA title since 1971
July 20 (UPI) -- Behind a 50-point performance by superstar Giannis Antetokounmpo, the Milwaukee Bucks beat the Phoenix Suns 105-98 in Game 6 of the NBA Finals on Tuesday night to capture their first championship in a half century.

NBA // 4 days ago
Basketball: Team USA's Zach LaVine enters COVID-19 protocols
July 19 (UPI) -- Team USA men's basketball guard Zach LaVine was placed into the COVID-19 health and safety protocols Monday and didn't travel with the rest of the squad on their flight to Tokyo for the Summer Games.

NBA // 6 days ago
Bucks edge Suns in Game 5 of NBA Finals, take 3-2 series lead
July 17 (UPI) -- The Milwaukee Bucks overcame a sluggish start and staved off a late comeback attempt by the Phoenix Suns for a 123-119 win in Game 5 of the NBA Finals on Saturday night at the newly named Footprint Center in Arizona. 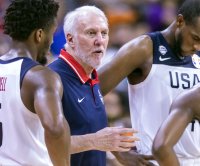