Trae Young, Grayson Allen get into scuffle during Summer League

July 6 (UPI) -- College stars-turned-NBA rookies Grayson Allen and Trae Young got into a scuffle during a Summer League game.

The Atlanta Hawks and Utah Jazz guards got feisty in the third quarter of the Jazz's 92-87 win Thursday at Vivint Smart Home Arena in Salt Lake City. Young was running around screens and looking for the ball on the play. He eventually caught a pass beyond the 3-point line.

Allen fought around the screens and got to Young. He got close to defend the former Oklahoma Sooners star, before Young deployed a ball fake. Young then picked up his dribble and bodied up Allen.

Allen then got closer to Young and the players got their arms tangled up. Young gave Allen a shove. The former Duke Blue Devils star ducked down and put his head into Young's chest. Allen then put his hands up in the air, making his case and pleading innocence to the nearby referee.

Both players were given technical fouls for the altercation. Allen was also given a personal foul. Young had 10 points, seven assists and four rebounds in the loss. Allen had nine points, a game-high eight assists and six rebounds for the Jazz.

Allen is no stranger to scuffles on the court. The 2015-2016 Wooden Award finalist was suspended during his junior season for tripping opposing players. 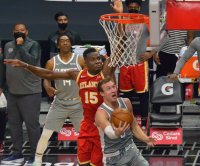 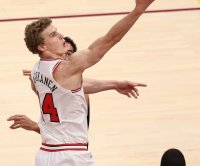